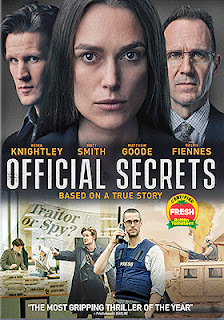 Paramount Home Media will be bringing the IFC Films release of director Gavin Hood’s film adaptation of the Marcia and Thomas Mitchell’s 2008 tell-all book, “The Spy Who Tried to Stop a War: Katharine Gun and the Secret Plot to Sanction the Iraq Invasion,” to the DVD marketplace on Nov. 26 … the title was mercifully shortened for its theatrical run to Official Secrets.

The film opened at Sundance in January of this year and then proceeded to work the film festival circuit for next seven months as something of an arthouse entry (with a number of wins along the way, including the Provincetown International Film Festival and Traverse City Film Festival) before being picked up by IFC Films for domestic theatrical distribution at the end of August.

For the record, the ARR for the limited theatrical run works out to 88 days and box office revenues currently stand at $1.9 million.

Keira Knightley plays the real-life Katherine Gun, who is a British citizen born and raised in Taiwan, which meant that she could speak fluent Mandarin.   Why is that important?

She returned to England, completed her education as a linguist, but found little in the way of a rewarding career along those lines.   She ended up working as a translator for GCHQ — which alphabet speak for “Government Communications Headquarters” — a top-secret government operation tasked with monitoring foreign-language transmissions for hints of terrorist operations and the like.

It’s now 2003 and the aftermath of Saddam Hussein’s 1990 invasion of Kuwait, and his subsequent pounding and retreat, which has left his Iraq as something of a rogue state in the eyes of the United States.   The drums are beating loud for an invasion (WMD and all) and it is during this tension that a secret document from an intelligence officer from the United States crosses her desk.

The gist of the document that Gun reads was asking the Brits to help gather “blackmail” information on certain United Nations members to secure their cooperation in a UN sanctioned invasion vote.   She was shocked and went to the press with the information.   All true.

It gets better.   First there was a hunt to try and figure out who leaked the information and Gun, fearing that her innocent co-workers would be swept up in such an investigation, stepped forward.

She was arrested and charged with treason.   Coming to her defense is Ben Emmerson (played by Ralph Fiennes), a specialist in international law and human rights (also a real-life character).   Official Secrets follows the year-long detention and pressure that she was put under for violation of the UK's Official Secrets Acts … which finally leads to Katharine Gun’s day in court and a twist ending (which will not be revealed here).

Official Secrets plays out like an Orwellian spy thriller, with the weight of an entire nation’s government trying to crush one of their own for stepping out of line. 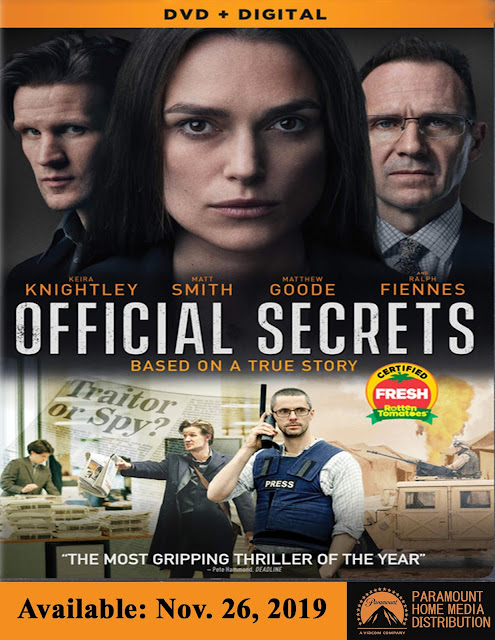