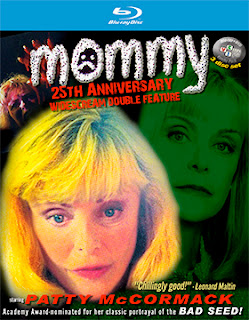 VCI Entertainment has tabbed Jan. 21 as the street date for a deliciously wicked double-feature starring Bad Seed Patty McCormack as, well, more or less herself as an adult.

We’re talking about writer/director Max Allan Collins’ 1995 direct-to-video gem, Mommy.   Yes, starring Patty McCormack in the title role.   VCI is teaming it with the 1997 sequel, Mommy’s Day, which makes for one hell of a double-feature on this Blu-ray/DVD Combo Pack special edition (with a bonus DVD chocked full of extras).

It’s clear that everyone had a great time with Mommy.   It’s pure cheese, but you have Patty McCormack as Mrs. Sterling (aka: Mommy), who projects her pent-up desires on to her 12-year old daughter, Jessica Ann (Rachel Lemieux) … Jessica Ann doesn’t get student of the year, the teacher dies.   A witness to the murder, dead too.   You get the idea.

On board as cast members are none other than pulp fiction crime novelist Mickey Spillane and scream queen great Brink Stevens (both reprised their roles in the sequel).

It eventually dawns on Mommy, as she becomes the prime suspect in a series of murders, that her little darling will rat her out, so she tries to kill her, then saves her from a junkyard dog, only to try and murder her one more time.   Dog, no … Mommy, yes!! 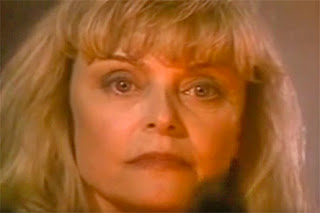 The sequel, Mommy’s Day, has a terrific opening as Mommy (aka: Mrs. Sterling) is on death row, but there’s a reprieve and before you can say “hallelujah” the prison gates swing open and she’s out on probation … on drugs, monitored and forbidden to see Jessica Ann.

Did you catch that last condition of probation, “forbidden to see Jessica Ann?”  Anyone who gets in the way of that one ends up dead, but Mommy insists, as the body count mounts, “I didn’t do it … and I can prove it.”   So who is the killer … Jan. 21 with the arrival of VCI Entertainment’s Blu-ray presentation of Mommy 25th Anniversary Widescreen Double Feature you will find out the answer to that question … and more!!

Extras — on a bonus DVD included with the Combo Pack — are the featurette titled “Leonard Martin on Mommy,” the original trailer, a blooper reel, the PBS documentary on Mommy, a video session with writer/director Max Allan Collins and Patty McCormack titled “Mommy’s Day” and the J. Rigler documentary, The Making of Mommy. 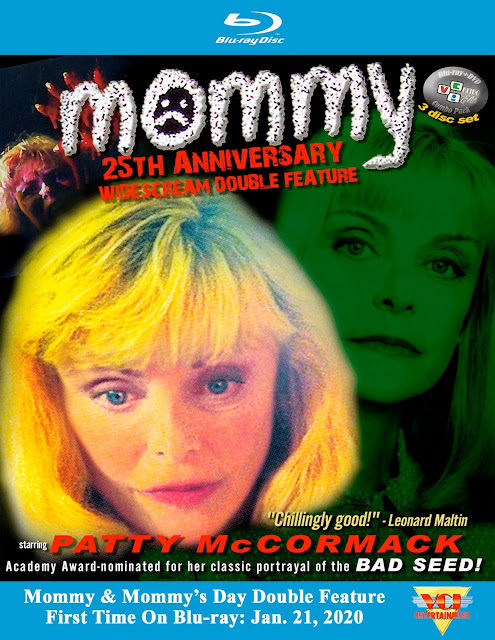