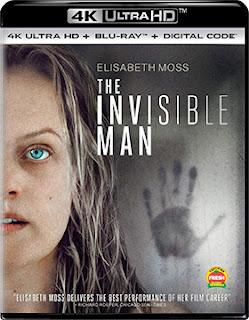 That’s all folks!  Done.  With the announcement this past week from Universal Pictures Home Entertainment the cupboard is now empty.
When writer/director Leigh Whannell’s The Invisible Man, starring Elisabeth Moss (as June in The Handmaid's Tale, plus such series as The West Wing and Mad Men) hits the street on May 26 — as a three-SKU product offering — there will be no more films left to release that have grossed at least $25 million in their respective theatrical runs.

Why $25 million?   That is the threshold for “hit” status and it has nothing to do with profit or loss on a production — you can find plenty of examples where a film grossed in excess of $25 million and lost money.   No, it is more about consumer awareness and that takes a nationwide break, backed by a significant advertising and promotional campaign and the film has to stick around long enough (weeks in release) to get to that level (a weak Friday opening and screens are lost or downsized and even a wide break can get truncated very quickly).

Theatres nationwide shutdown on Mar. 20 and this is the last film with the $25million plus profile from the pre-shelter-in-place period to get a street date.

For the record, the ARR is 88 days and the box office take, which abruptly ended with the shuttering of some 40,000 screens nationwide, finished off at $64.3 million.

Way, way back in 1997, we waited and waited for the first “new” theatrical film, with that profile (a minimum of $25 million in box office receipts), to materialize on the new DVD format.   DVDs had started to be released in March of that year, but it wasn’t until July 8 that the first two “new” theatrical releases arrived … Absolute Power ($50.0 million) and Vegas Vacation ($36.4 million), both from Warner Bros. and both with ARR profiles of 144 days.

In the years that have followed, over 24 years (plus a few extra weeks), it became a given that films would open in theatres, fall into certain box office categories ($100 million plus, $25 million, $10 million, etc.), and then march out in their own good time to the home entertainment packaged media marketplace.   That run ends on May 26.

Sure, there are films with lesser ticket sales still in inventory, even some from the launch year of the format (1997) that have never been released on DVD, but all of the high profile entries are gone … gone … gone.

It won’t be until theatres reopen and new films start generating ticket sales that we will have new films with this profile.   Theatres could open by the July 4th weekend … maybe Labor Day.   Best case, sometime in September as the earliest window for new DVD, Blu-ray and 4K Ultra HD product offerings from the start-up crop of new theatrical productions that finish the cycle from theatres-to-home entertainment.

The various Hollywood studios will have to get very creative during June, July and August with catalog and anniversary promotions to fill in this gap.

As for The Invisible Man, Universal Pictures Home Entertainment will be releasing Combo Pack editions for both the 4K Ultra HD (with Blu-ray) and Blu-ray (with DVD) formats, plus a stand-alone DVD selection.