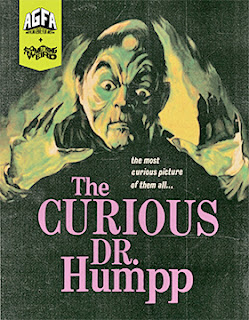 AGFA (American Genre Film Archive) will be teaming up with Something Weird for the release of a newly-minted Blu-ray edition of Argentinian filmmaker Emilio Vieyra’s The Curious Dr. Humpp on Jan. 26.

This is a new 2K restoration from the film’s 35mm internegative.

The film is odd and its distribution history is a little sketchy.  Back in the early 1960s in Argentina, Emilio Vieyra started grinding out films after spending much of the 1950s acting in locally-produced films.   He had some success with Stay Tuned for Terror in 1965 and then came his 1966 film, Blood of the Virgins, which raised his visibility.

Enter La Venganza del Sexo, which seems to have been picked and dubbed for domestic theatrical distribution by a fly-by-night indie called Forbes-Unistar (a search of the “Motion Picture Almanac” for the period comes up empty) and then later J.E.R. Pictures picked up the film, which had been titled for domestic consumption as The Curious Dr. Humpp. 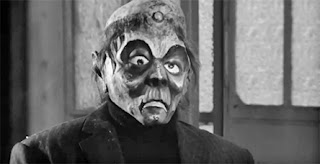 The main character, Dr. Humpp, is played by Aldo Barbero, who had done a little television work before making his film debut here.   He would team up with the prolific Vieyra again in 1971 for The Naked Beast … eventually Barbero would become a regular in countless Argentine Telenovelas.

The movie, by any standards, had a rather sketchy distribution history (we can’t even confirm that it was actually released theatrically, despite having the two aforementioned distribution companies).    In the end, it doesn’t matter.   Director Emilio Vieyra, actor Aldo Barbero and their film collaboration, The Curious Dr. Humpp, came to light in 1993 and found a home on VHS courtesy of Something Weird … discovered, savored … a cinematic legend was born. 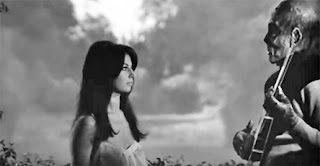 The story, which seems drug-induced, or at least heavily influenced by drugs, has Dr. Humpp and his minions (grotesque creatures) capturing sexually active couples so that their “sex forces” can be drained in order to keep the evil doctor forever young.   There’s more, but it really has to be seen to be fully appreciated.   Not always coherent, but definitely a film you will remember.

As to bonus treats, AGFA and Something Weird have both the dubbed version, The Curious Dr. Humpp, and for the first time, the original Spanish-language presentation of La Venganza del Sexo, which literally translates as “Revenge of Sex.” 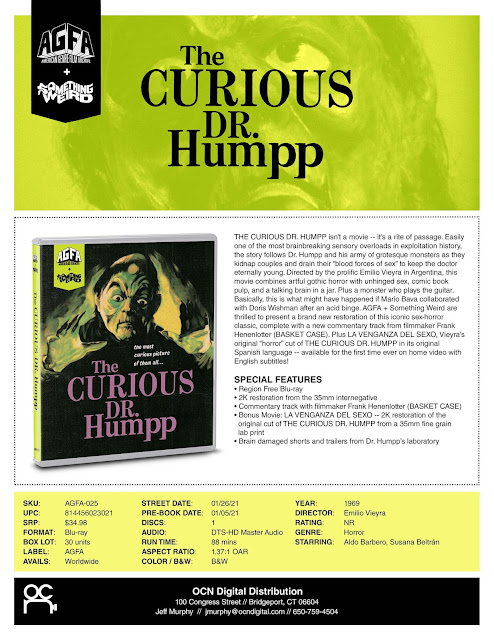 Email ThisBlogThis!Share to TwitterShare to FacebookShare to Pinterest
Labels: Director Emilio Vieyra's The Curious Dr. Humpp Arrives On Blu-ray From AGFA On Jan. 26