Oscilloscope Laboratories Finds And Restores Tom Noonan's 1994 Film Release Of What Happened Was ... 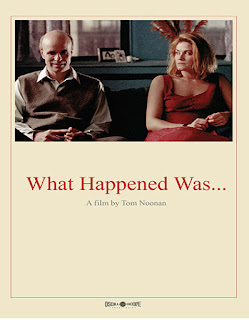 Oscilloscope Laboratories announced this past week that a newly-restored presentation of actor-turned-director Tom Noonan’s What Happened Was … will be available on June 22 as both DVD and Blu-ray product offerings.

What Happened Was … made its debut at the Sundance Film Festival in January of 1994 and then had an ever-so-brief arthouse run in the fall of the same year.    Since it was 1994, an indie production … and before the arrival of DVD, it got a VHS release two years later and has been out of print for over 25 years.

This is a new 4K film restoration from the original 35mm negative.   For most this will be the film’s debut!!

Tom Noonan, had been an actor and appeared in such films as Heaven’s Gate, Wolfen, F/X, Monster Squad and was Francis Dollarhyde in director Michael Mann’s 1986 release of Manhunter.   After being the Ripper in Last Action Hero in 1993, he took time off from being scary and sat down and wrote a play, which he adapted for the screen and got financial backing to direct … it was his debut as both a screenwriter and film director. 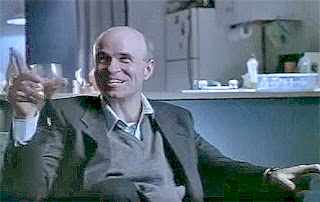 Painful.  That’s the sad story of two lonely people on a “first date” in Noonan’s What Happened Was …, which teams him with Karen Sillas (Trust, Simple Men, Flirt, Ned Rifle).  They are co-workers at a law firm.  Underlings.

If you’ve seen Noonan in any films, you understand that gaunt, creepy characters are what he is known for.  He looks the part.   Getting a date would always be a challenge, despite the fact that he is well-educated.

Before the evening gets too far along — he has arrived at her place — she actually brings his “looks” up and mentions that their co-workers have dubbed him “Mister Strange.” 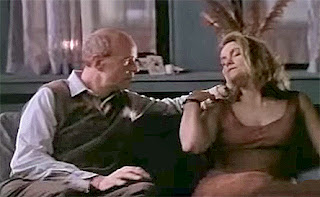 While attractive, she knows that life is passing her by.   Men have stopped calling, she works as an “executive assistant,” which means she answers the phone and gets coffee.   Maybe that is why she is willing to have “Mister Strange” over.

Painful.   Sad.  Insightful.  Beautifully presented … a lost film, resurrected by Oscilloscope and on June 22 it will be available once again for arthouse film lovers to enjoy and savor.

Bonus features include two newly-prepared video sessions.   The first features a discussion of the film with writer/director/actor Tom Noonan and producer Scott Macaulay (Gummo, Julien Donkey-Boy, Idlewild, Raising Victor Vargas, The Assistant), and the second is a video session with actress Karen Sillas. 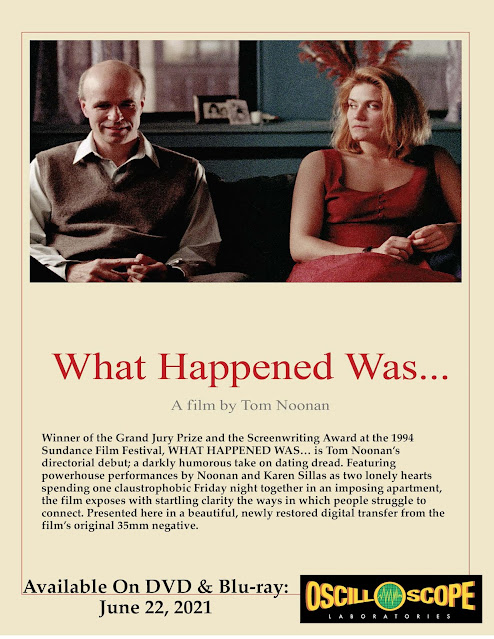 Email ThisBlogThis!Share to TwitterShare to FacebookShare to Pinterest
Labels: Oscilloscope Laboratories Finds And Restores Tom Noonan's 1994 Film Release Of What Happened Was ...