Happy In The Valley From Indican Pictures On Feb. 12 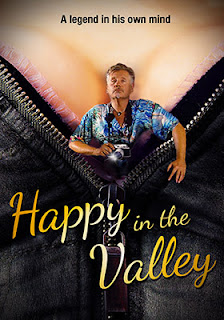 William Forsythe, who is just about as scary as it gets as Manny in Boardwalk Empire, takes on a different persona in writer/director Lee Madsen’s black comedy, Happy in the Valley.  Announced this week for a DVD bow on Feb. 12 from Indican Pictures.

Drugs, booze and a world-weary view of been-there, done-that have left him wondering what’s the point.   Even his wife, Donna (Ursula Brooks — Daybreak, Full Frontal, etc.), who puts up with quite a bit — imagine naked women being photographed in your living room — is at her wits’ end.

The solution comes in the unexpected form of Wade Ward (Shaun Sipos — Lost Boys: The Tribe, The Grudge 2, etc.) — an “art school student” — who is recruited to photograph and document Stewart at work … all for a biography about his life.

Images of Russ Meyer, Tinto Brass and Radley Metzger — masters of their craft — spring to mind when you see Forsythe walking the walk … and talking the talk (great lines from Madsen).

Email ThisBlogThis!Share to TwitterShare to FacebookShare to Pinterest
Labels: DVD and Blu-ray Release Report, Indican Pictures' Happy in the Valley on Feb. 12.