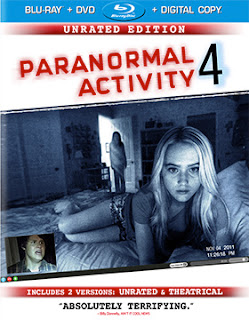 There is that scene from Apocalypse Now when Lieutenant Colonel Kilgore (Robert Duvall) strides boldly along the beach — seemingly oblivious to the incoming mortar fire — and says, “I love the smell of Napalm in the morning.”

He rambles on for a bit, then hits us with “Smelled like victory.”  Perfect.

The same holds true for film franchises, in a metaphorical sense, they “smell like victory.”  The studio brass love that smell of Napalm in the morning when those box office grosses come rolling in for their latest “carpet-bombed” theatrical rollout (3,000 screens and more).  There is that certain “aroma of success” from the latest installment in a carefully nurtured set of film sequels.

Such is the case with Paramount Home Media Distribution’s Jan. 29 DVD and Blu-ray/DVD Combo Pack (with UltraViolet) of the directing team of Henry Joost and Ariel Schulman’s Paranormal Activity 4.   Victory in every sense of the word!

This “haunted house” film franchise has quickly become an annual Halloween event.  The trick is sustaining it … being creative; new twists and turns.  With Paranormal Activity 4, the filmmakers did just that with new characters (plus a visit from old “friend” … or is that “fiend?”) and plenty of new creepy goings-on.

With a domestic box office take of $53.8 million, the odds favor a fifth installment or some creative spin-off that pretty much acts as a fifth film entry in the series by Halloween of next year.  Bet on it!
In the meantime, the Jan. 29 home entertainment release date for Paranormal Activity 4 yields an ARR that works out to 102 days. 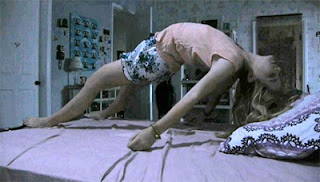 Fans of the series will have a choice of either the R-rated theatrical release or an uncut version of the film as viewing options — that’s for both the DVD and the Blu-ray/DVD Combo Pack.  Exclusive to the Blu-ray SKU is 30 minutes of “found footage” presented as “The Recovered Files.”