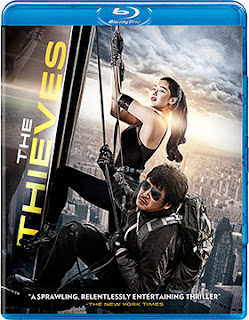 South Korea has put out some amazing films (The Warrior, Front Line, Brotherhood of War, My Way … Old Boy, anyone?) but a new one has them all beat when it comes to the box office.

The Thieves became Korea’s highest-grossing movie in history, selling more than 10 million tickets in its first three weeks, half a million of those during its first day.  By the time it exited theaters last fall, more than 13 million tickets for the film had been sold.

Director Dong-hoo Choi (Woochi, The Big Swindle) takes heist films to another level, following five top-notch thieves planning a major casino robbery, with the “Tear of the Sun” (a $20 million, 318-carat diamond) being the ultimate prize.  An impenetrable vault, too many cops to count and no trust among each other combine for a wild ride.

Bonus feature include two featurettes — “Meet The Thieves” and “The Making of The Thieves.”