The Devi's In The Details From Image Entertainment, Mar. 12 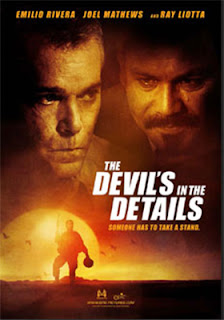 Image Entertainment has tabbed Mar. 12 as the DVD and Blu-ray debut date for Waymon Boone’s — the former lead singer of the rock group Splender — border drug war thriller, The Devil’s in the Details.

With numerous music videos and a pair of award-winning short films (Daddy’s Little Girl and The Conversation) under his belt, Boone makes the move to feature films as both the director and writer on this project.

Inspired by an actual news story, plus Boone’s own choreographed ideas for a barroom sequence/encounter that is central to the intricate twists and turns that follow, we are introduced to Iraq War veteran Tom Conrad (Joel Mathews — Bloodline).  He is trying to integrate back into the civilian world, complete with wife and child, but is having a tough go of it.

A seemingly innocent encounter at a local watering hole with an affable stranger (played with a wickedly sadistic approach by Emilio Rivera — as Marcus in the Sons of Anarchy television series, plus such films as Act of Valor, Con Air, Collateral, etc.) turns into a kidnapping and brutal torture at the hands of his new “friend,” who is actually the enforcer for a ruthless drug cartel.

His unique combat skills are what they are after … he will bend to their will; to their needs.   Failure to help them with their drug smuggling schemes and his family will be murdered and he will simply disappear.   Not much of a choice there!

In a clever twist, it turns out that Conrad’s only hope of survival rests in the hands of his therapist, Dr. Bruce Michaels (Ray Liotta), a former Navy SEAL.

With news headlines filled with stories of brutal drug-related murders in Mexico — beheadings, torture and the like — Boone’s first venture into the feature film arena with The Devil’s in the Details rings true.  He has assembled a solid cast, mixed in a clever script and the result is an immensely-watchable action flick that Image Entertainment will have no trouble spinning into gold during Q1’13.