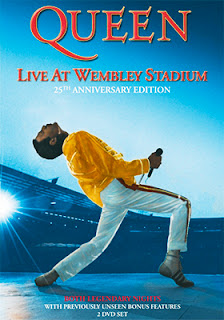 Eagle Rock Entertainment announced this past week that on Mar. 12 the magical 1986 concert at Wembley by the rock group Queen will be re-released as a double-disc DVD SKU titled Queen: Live at Wembley Stadium – 25th Anniversary Edition.

There were two sold-out concerts (Friday, July 11th and Saturday, July 12th) … for the first time Eagle Rock has re-mastered both performances — a massive 26-song set on Friday, with two additional numbers on Saturday.

In addition to the concerts, there all sorts of bonus goodies, including secret footage of the group in rehearsal, newly prepared interviews with Roger Taylor and Brian May, plus a 2003 film featuring the same two original Queen band members.