Blu-ray Edition For The Sinful Nuns of St. Valentine, May 21 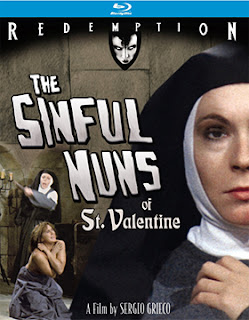 Nunsploitation is a film category all on its own — always sick and twisted.  It’s sort of a companion, a cousin if you will, to those wonderful women in prison films that we all love so much.  You can only imagine that it is a very guilty pleasure indeed when you have nuns running what amounts to a prison!

That’s precisely what Kino Lorber has planned for release on May 21 with the Blu-ray debut (along with a remastered DVD edition) of Italian filmmaker Sergio Grieco’s 1974 Nunsploitation gem, The Sinful Nuns of Saint Valentine.

Bad girls, unruly young women and those being punished for this and that are placed under the watchful eye of the Mother Superior/Abbess (Françoise Prévost) at a remote convent … she naturally “whips” them into shape, which includes her latest “guest,” a young woman named Lucita (Jenny Tamburi).

A riff on Romeo and Juliet is worked into the proceedings, but that’s just a loose thread that connects the lurid sex scenes together (no one really comes for the plot).

Email ThisBlogThis!Share to TwitterShare to FacebookShare to Pinterest
Labels: Blu-ray Edition For The Sinful Nuns of St. Valentine May 21, DVD and Blu-ray Release Report