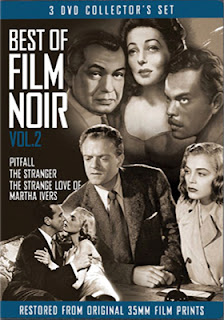 The Film Chest announced this past week that three additional film noir restorations from original 35mm film elements will be available for collectors to own on June 25 in the three-disc set titled Best of Film Noir, Volume Two.

Included in this package are Pitfall, (1948, with Dick Powell and Lizabeth Scott, who are joined by Raymond Burr and Jane Wyatt), The Stranger (1946, directed by and starring Orson Welles, with Edward G. Robinson and Loretta Young) and The Strange Love of Martha Ivers (Also 1946, featuring a knockout cast that includes Kirk Douglas, Lizabeth Scott, Barbara Stanwyck and Van Heflin).

Bonus features include commentary options and before and after restoration comparisons.