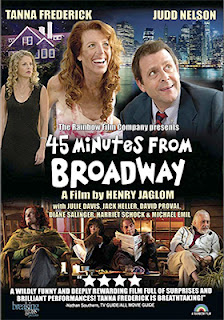 Writer/director Henry Jaglom is what is affectionately referred to as an actor’s director (or filmmaker).   Like Woody Allen, actors look for the opportunity to work with Jaglom; they want to have parts in his movies.

Perhaps it is an ego thing … doesn’t matter, that’s just the way it is.

Actors and families of actors are, well, different.   It’s both a gift and a curse.  Consider Pandora (Tanna Frederick), a mercurial thespian who has come crashing back to earth (once again) after her latest love-found/love-lost romance has come to its all too frequent and predictable conclusion.   She retreats to the family homestead to heal her wounds.

Her parents are also actors (played by Jack Heller and Diane Salinger), so normal to them is not necessarily normal to what they refer to as “civilians.”   A “civilian” would be all of non-actors; you know, people without the “gift.” One such “civilian” is her sister, Betsy (Julie Davis), who — it would appear — has a certain distain for both her parents and her flighty sister (perhaps, just perhaps, because they are ACTORS).   She too returns to the family digs, but with her fiancé in tow (played by Judd Nelson) … let the games begin!

And that is exactly what 45 Minutes from Broadway is all about.   Games and diversions!