Cinema Libre's The Happy Poet To DVD On June 18 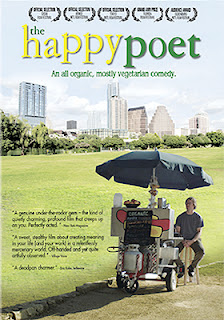 Paul Gordon, the writer, director and star of The Happy Poet has likely experienced all of the highs and lows associated with the indie filmmaking process.   Getting your film financed and made is trying enough, but the frustration of knowing that you’ve got a winner — complete with terrific reviews and a fistful of festival wins — only to see it just drop out of sight has to be nerve-wracking.

Back in 2010, The Happy Poet was riding high with one win after another — even some international play — despite some marvelous reviews to go along with the audience applause it never got beyond the festival circuit.   Quirky comedies that include both romance and conflict can be tough to market … where’s the niche?   Who is the audience?

Finally, we can report that the cloud has been lifted as Cinema Libre has tabbed June 18 as the DVD debut date for this romantic comedy/drama about a misfit poet named Bill (played by Gordon) who embarks upon a new career path — an unlikely business venture to be sure — that just might be his salvation.   Or not.

It’s Texas, the land of BBQ, ribs and beef.   But in Austin, this failed poet has gone all in with a food stand on wheels (you know, a hot dog stand … you see them everywhere) that doesn’t sell hot dogs, but features hand-crafted veggie sandwiches and the like. 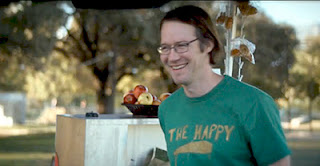 OK, Austin is a college town, it could work, but you might just need a little salesmanship for that … not the strong suit for this poet that writes depressing poems that no one reads.   He’s not aces on marketing or personality either.

What he does have going for him is an undaunting persistence.   It doesn’t occur to him that he is failing (except when people come looking for money).  He is an artist … a food artist, and if he just stays at it, an audience will find him.  Well, at least that is the plan … if there is a plan.

Now to make to this set-up work, Bill has something of a Greek chorus — customers, friends and a potential romantic relationship — that serve as props for Gordon (the actor) to play off against.   This is deadpan comedy (think: Steven Wright humor) that gets one chuckle and laugh after another from the non-sequitor approach to the material.   A “happy poet” (he’s not) selling food that runs counter to conventional wisdom (as one from the chorus says, “are you kidding?”).   What fun!

Email ThisBlogThis!Share to TwitterShare to FacebookShare to Pinterest
Labels: Cinema Libre's The Happy Poet To DVD On June 18, DVD and Blu-ray Release Report