The 3 Geezers On DVD From Green Apple Entertainment On Aug. 13 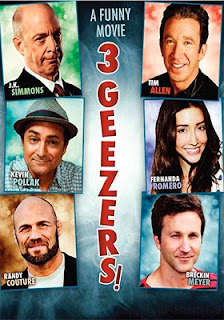 The cinematic adventures of great trios include the Amigos, Musketeers and Caballeros — screen legends one and all.

And then there are actors who get into their roles.  It’s no secret that Daniel Day-Lewis literally becomes the character he is playing — as long as the film is in production he is Abraham Lincoln, Daniel Plainview or Christy Brown.

Brad Dourif went so far as to hire a local to read his lines back to him in writer/director Kevin Barker’s Last Kind Words.   He did that so he could get the Kentucky dialog and voice inflections right for his character ... and that was for a three or four day film shoot on an indie film product.

That’s how serious good actors can be in getting into the “skin” of their characters!
So what happens when such an actor collides with a trio of legends?   That is the comedy set-up for director Michelle Schumacher’s 3 Geezers, due out on DVD from Green Apple Entertainment this coming Aug. 13.

Veteran character actor J.K. Simmons (Law & Order, Juno, Spider-Man, etc.) is seemingly playing himself as J. Kimball, an actor up for the role of an 85-year-old man.  To get “into” the role he heads over to the nearby Coconuts Convalescent Home with a video crew to document the daily activities of old farts, in this case three old geezers (Lou Beatty Jr., Tony Cummings and Basil Hoffman). 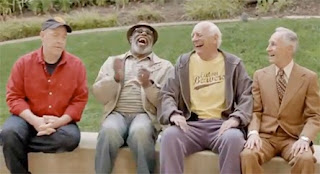 He will interact with them and study the video … in no time he will have it down pat.   How difficult can this be, he reasoned.

Damn difficult as it turns out!   When the three geezers get through with him he will wish he was playing anyone but an 85-year-old!  What goes on with these old codgers absolutely boggles the mind!

Of note, Simmons and filmmaker Schumacher are husband and wife … and clearly they have lots of friends in Hollywood as the film is peppered with cameos by the likes of Tim Allen, Sam Rami, Kevin Pollak and Randy Couture (and more).

Email ThisBlogThis!Share to TwitterShare to FacebookShare to Pinterest
Labels: DVD and Blu-ray Release Report, The 3 Geezers On DVD From Green Apple Entertainment On Aug. 13