Parker Posey Shines In Virgil Films And Entertainment's Sept. 17 Release Of And Now A Word From Our Sponsor 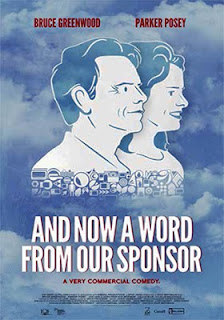 Adan Kundle (Bruce Greenwood — Double Jeopardy, Star Trek, Flight, etc.) is an advertising genius and head of a major ad agency, but like Billy Pilgram, he has become unstuck — not so much in time, but in reality.   It seems that he stopped in front of a multi-TV display one day and that was it … next thing you know he’s recovering in the hospital.

Maybe it was something that he ate.   Perhaps he was just exhausted.   That could explain him passing out.   The “unstuck” part is that when he is awake the only words coming out of his mouth are advertising slogans … “a little dab will do ‘ya.”

This real-life genius suddenly has the wisdom of Chauncey Gardiner; the clicker to the TV is his guide to the world and the conversations he has with people — mainly with Parker Posey as a hospital worker named Karen — are banal, but somehow seem appropriate to whatever subject is at hand.   He’s like an encyclopedia of one-liners.

This guy is a big shot and Karen — who is some sort of hospital facilitator — immediately recognizes him and does her best to get him out of the hospital and into a local rehabilitation center (rest home) where he might have a better chance of recovery.  When that doesn’t work out as planned, she ends up taking him home, where she lives with her teenage daughter, Meghan (Allie MacDonald — The House at the End of the Street, The Riverbank), who thinks mom might have gone over the edge by bringing a “crazy” stranger into their home.

Back at the agency the vacuum of Aden’s absence is being filled by a company weasel named Lucas (Callum Blue) and Karen finds herself being recruited to help declare her new friend incompetent. 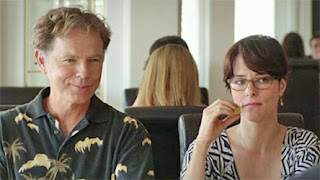 This is nice romantic comedy that neatly combines deadpan humor with satirical jibes.   Greenwood is pitch-perfect as the ad executive who delivers his lines with a straight face as if he were citing passage from the Bible.  And, of course, Parker Posey is amazing.

There, as you can see you didn’t need know anything other than Parker Posey is in Virgil Films & Entertainment’s Sept. 17 DVD debut of director Zack Bernbaum’s And Now a Word From Our Sponsor.   Just put it in your queue for purchase or rental.

Email ThisBlogThis!Share to TwitterShare to FacebookShare to Pinterest
Labels: DVD and Blu-ray Release Report, Parker Posey Shines In Virgil Films And Entertainment's Sept. 17 Release Of And Now A Word From Our Sponsor