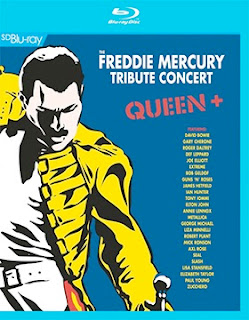 It’s hard to imagine that 72,000 people packed Wembley Stadium on the evening of Apr. 20, 1992 for a night-long event concert that included the likes of David Bowie, Elton John, Annie Lennox, George Michael, Axl Rose and the surviving members of Queen (and more, many more).   Putting that kind of a line-up together for a four-hour concert celebration just seems so mind-boggling, but that’s exactly what happened.

On Sept. 3, Eagle Rock Entertainment will deliver a Blu-ray and a three-disc DVD set commemorating this concert event with the remastered presentation of The Freddie Mercury Tribute Concert.

Freddie Mercury had succumbed to AIDs in November of the previous year and this concert was both a tribute to him and his music and a fundraiser for the newly founded Mercury Phoenix Trust — the event exceeded all expectations.   Not only did the concert sell out on the day it was announced (with the line up not even set), but the event itself was broadcast worldwide (over 70 countries) and reached an audience estimated at over one billion people.   WOW!

The concert itself is divided into two distinctive sets.   It begins with an introduction by Queen members Brian May, John Deacon and Roger Taylor and then launches into performances by Metallica, Def Leppard and Guns 'n' Roses, with video montages used between these groups respective on-stage performances as the roadies stage preparations for the next group. 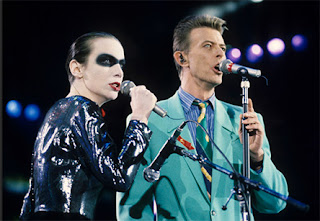 That segment in itself would have been enough to please concert-goers, but that was just the beginning.

After Elizabeth Taylor’s speech the concert took on a more personal approach … individual rock legends took to the stage for a 20-song collection of Queen hits.   These ranged from David Bowie and Annie Lennox teaming with Queen for “Under Pressure;” Elton John and Axl Rose delivering “Bohemian Rhapsody;” Black Sabbath’s Tony Iommi on stage with The Who’s Roger Daltrey (and of course Queen) for “I Want it All;” Led Zeppelin’s Robert Plant serving up “Crazy Little Thing Called Love” to none other than Liza Minnelli capping it all off with “We Are The Champions.” 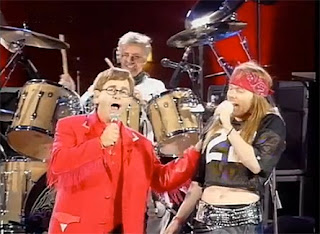 It is clear throughout the concert presentation that the 72,000 assembled were there to celebrate a life and enjoy the proceedings.   They often joined in unison with those on stage in singing the words to Freddie Mercury and Queen’s hits … a real “WOW” factor.