Out Loud On DVD From Ariztical Entertainment On Jan. 14 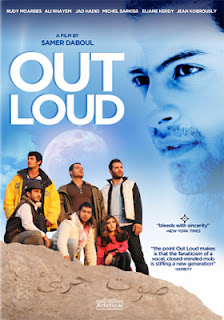 The landscape reminds one of Southern California.   The story, if it was read to you as a simple synopsis (leaving out a couple of crucial details), could also be centered in So Cal … a gay man outcast from his family, boyhood friends dealing with hardship that range from drug-dealing family members to unrequited love.

However, in writer/director Samer Daboul’s Out Loud, due on DVD from Arizitcal Entertainment this coming Jan. 14, his cast members are not walking the streets of Los Angeles or enjoying the rugged mountains of Big Bear or celebrating in the foothills of Orange County … they are living in Lebanon.

The subjects addressed, the story that unfolds and even what they say, although “just a movie,” are things that could get them killed.   In fact, during the filming the cast and crew were often harassed by the locals and there was always the danger that some of the cast — specifically the characters of Ziad (Jean Kobrosly) and Rami (Ali Rhayem) — could go to prison for being gay, even if it was “just a movie.” 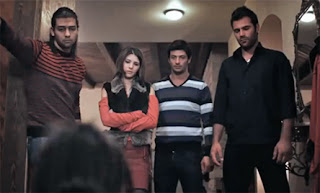 Although the film was shot on location in Lebanon, ironically with government approval (perhaps no one bothered to dig too deeply into the script), the post work had to be completed in the United States … it was simply too dangerous to attempt to assemble the raw footage into a coherent narrative in Beiruit.

Out Loud, in Arabic with English subtitles, emerges as an insightful look at a world where free expression and taboo relationships are challenging and often fraught with peril.

Email ThisBlogThis!Share to TwitterShare to FacebookShare to Pinterest
Labels: DVD and Blu-ray Release Report, Out Loud On DVD From Ariztical Entertainment On Jan. 14