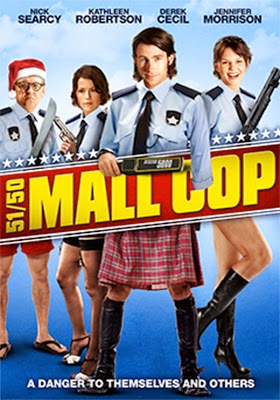 If you are looking for an urbane comedy, with subtle humor and witty dialog that brings a slight smile to your face … look elsewhere.

But if you want FUNNY, then Indican Pictures has lined up two comedies that are going to be right up your alley.   Poor taste, vulgar humor, sight gags and packed with laughs are exactly what director David Greenspan’s 51/50 Mall Cop (May 25) and filmmaker Brian O’Connell’s Angry White Man (June 24) deliver!!!

Frank (Derek Cecil — House of Cards, Banshee, Treme) is a mall cop.   Actually, more like a night watchman at an Albuquerque shopping mall, who has a tragic accident one night when chasing a would-be burglar through a plate glass window. 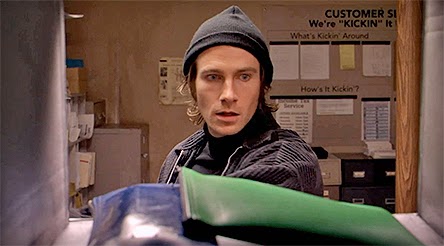 Skip ahead six months and we once again meet up with Frank, a one-armed Frank, back for a visit (a little bit of nostalgia) at the place where he used to call home, the mall.  He’s had no luck finding a new job (he was right handed and all of the employment applications that he fills out look like they were written by a chicken) and so he drops by to hook up with the old gang … and to meet his replacement.

In short order he falls in love with Donna (Kathleen Robertson), his replacement, and hits upon a scheme to rob the place!   But he has to outwit mall cop White Wedding (seriously), played by Nick Searcy, and keep Chris, the record store sales clerk (Jennifer Morrison) from seducing Donna … and do all of this with just one arm!! 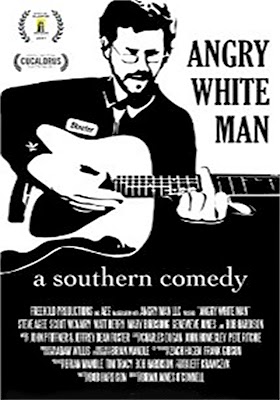 In Angry White Man, due in stores on June 24, we have the story of a man following his dream of becoming a country singer.  It’s a hard road, especially if you don’t have much in the way of talent.

Skeeter (Bob Hardison) is a good old boy who is down on his luck.  You know that old joke, “What do you get when you play a country song backwards?”  The answer is: “You get your house back, your wife back, your dog back and your truck back.”  Well, that pretty much sums up Skeeter.

His would-be bride has dumped him, he drinks too much beer and work is something of mystery.  But when he invites a black Jehovah's Witness into his home for a little one-on-one (including a couple of bong hits) he suddenly sees the light and wants to follow his dream … go to Nashville, meet the great Bulldog Hays (Matt Berry) and launch his own singing career. 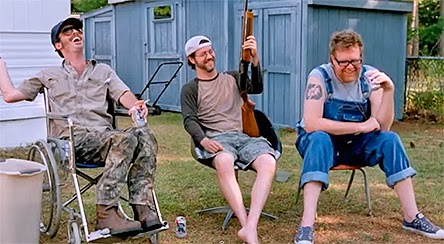 With help of his drinking, gun-toting and joke telling buddies (“would you rather be a gay black dude or a Jewish midget?”) Walt (Scoot McNairy) and Floyd (Steve Agee), a road trip (like none other) is planned.   Along the way they will encounter ugly women, drunk women and naked women, but Skeeter will not be detoured, he will find that stage and sing his songs!

Email ThisBlogThis!Share to TwitterShare to FacebookShare to Pinterest
Labels: DVD and Blu-ray Release Report, Indican Pictures Turns On The Laugher With 51/50 Mall Cop On May 27 And Angry White Man On June 24