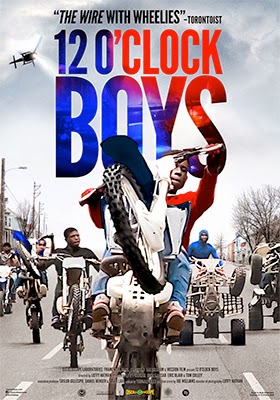 Oscilloscope Laboratories has tabbed Aug. 5 for Blu-ray and DVD editions of documentary filmmaker Lotfy Nathan’s 12 O’Clock Boys, a unique look at a group of Baltimore teens who are outlaws, gang members and dirt bike legends.

A brief theatrical showcase run generated ticket sales of $44,108 … the ARR comes in at 186 days.

In FilmWorks Entertainment’s recent DVD release (Apr. 22) of Chris Kitchen’s Freedom Riders, he detailed how a group of bike riders defied the U.S Forest Service to blaze trails through the rugged Teton Pass area of Wyoming.  They had a passion … and lived it, regardless of the consequences.

With these Baltimore teens, known as the “12 O’Clock Boys,” they too defy the authorities with their equally passionate love of dirt bikes, but their thrill-rides are not in some remote forest, but on the gritty streets of Baltimore.

They’ve learned that cutting in out of traffic at breakneck speeds will not bring the police down on them since there is a prohibition against giving chase out fear of making their death-defying stunts even more dangerous — not only to themselves, but to the public in general.

Over a three-year period filmmaker Lotfy Nathan tracks the “gang” — which draws their name from the 90-degree wheelies/back stands that is their signature move.   In particular he follows Pug, a good-natured kid, with a love of animals (strays like himself) and his desire to join the “12 O’Clock Boys.”