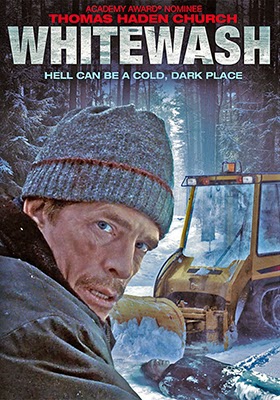 Much is owed to Quentin Tarantino’s Pulp Fiction and his editing collaboration with the Oscar-nominated Sally Menke.   Go ahead and reassemble that film in chronological order and you’ll find that it simply doesn’t deliver the same narrative punch.

Canadian actor-turned-filmmaker Emanuel Hoss-Desmarais has applied the same techniques to his first outing behind the camera (he also co-wrote the script with newcomer Marc Tulin) and in doing so has taken a tale of a somewhat delusional loner to an entirely different level.

The film in question is Whitewash, which has been piling up awards and nominations on the festival circuit and is now making its DVD debut courtesy of Oscilloscope Laboratories on Sept. 2.

Thomas Haden Church (Best Supporting Actor nomination for Sideways) is Bruce, a none-too-bright and none-too-successful snowplow operator in some remote corner of Quebec.   He drinks, he does stupid things … at least that’s the impression you get as he goes for a late night romp in his snowplow and in the process manages to mow down some poor schmuck named Paul (Marc Labrèche) who wanders into the path of his out of control “lethal weapon.”

A drunk driving, hit-and-run snowplow accident … let’s see you craft that storyline into a taut mystery/thriller that keeps you glued to your seat keenly focused on what is going to happen next.   That’s precisely what filmmaker Emanuel Hoss-Desmarais has accomplished with Whitewash.

In a panic, Bruce, our drunken snowplow operator, goes careening off into the wilderness — in the middle of a Canadian blizzard — while the local authorities are left to “piece together” the events of the accident.   By the time he sobers up the next day he is hopelessly lost … survival mode kicks in and during this period of quiet desperation the backstory of the events leading up to the accident are cleverly revealed.

Nothing is as it first seemed and that’s the beauty of Whitewash!!

And, even if you didn’t care about the storyline of this sweet little cinema pleasure, you will not be disappointed by the performance of Thomas Haden Church.  He deftly blends together the full range of human emotions — terror, guilt, fear, pathetic hopelessness and more — with a touch of comedy that is both subtle and black.