Justin Hayward: Spirits … Live at the Buckhead Theatre, Atlanta On DVD And Blu-ray From Eagle Rock Entertainment On Aug. 17 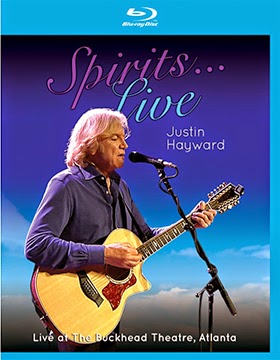 When you say the name Justin Hayward you will likely get a few blank stares.   But when you say “Moody Blues,” there is a very good chance that the lyrics from “Nights in White Satin” or “Tuesday Afternoon” will come spewing forth.

In fact, the legendary rock group Moody Blues and Justin Hayward are pretty much interchangeable … he wrote both of this icon rock hits and was the Moody Blues frontman for years and years.

Now performing solo (and with others) his 2013 live concert from the Buckhead Theatre in Atlanta, Georgia, which is titled, Justin Hayward: Spirits … Live at the Buckhead Theatre, Atlanta, will be making its way to DVD and Blu-ray courtesy of Eagle Rock Entertainment on Aug. 17.

The 15 song set sports a mixture of Moody Blues standards — the aforementioned “Nights in White Satin” and “Tuesday Afternoon,” plus “Question” and “Your Wildest Dreams,” as well as a half-dozen cuts from Hayward’s Spirits of the Western Sky release — “The Western Sky,” “In Your Blues” and “One Day, Someday.”

Email ThisBlogThis!Share to TwitterShare to FacebookShare to Pinterest
Labels: Atlanta On DVD And Blu-ray From Eagle Rock Entertainment On Aug. 17, DVD and Blu-ray Release Report, Justin Hayward: Spirits … Live at the Buckhead Theatre