Bunnyman Massacre On DVD From Midnight Releasing On Aug. 12 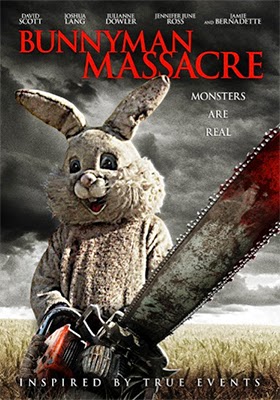 Bunnyman (Joshua Lang) returns for another round of bloodletting and carnage in Midnight Releasing’s Aug. 12 DVD debut of The Bunnyman Massacre.

Back in 2011, writer/director Carl Lindbergh took some pretty stock horror concepts — victim pool, remote locations and a mystery killer — and weaved them into a slasher/thriller that introduced a new menace to teens who dare wander off the main highway … Bunnyman.

This time out he’s expanded his field of candidates for slaughter from the standard victim pool of scantily clad young woman (and their friends) to include members of the local law enforcement community, which brings a shaper focus on his chainsaw’in ways.

Bonus features include filmmaker commentary, deleted scenes, cast and crew interviews and a trio of featurettes, including one titled “Joe's Guide to Dating” and a second titled “Bunnyman Gets Fast Food.”

Email ThisBlogThis!Share to TwitterShare to FacebookShare to Pinterest
Labels: Bunnyman Massacre On DVD From Midnight Releasing On Aug. 12, DVD and Blu-ray Release Report