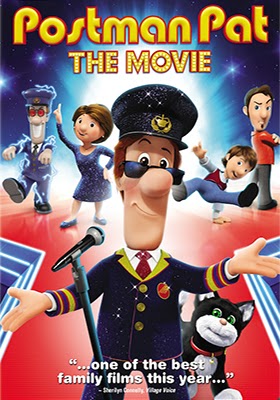 This former animator for Disney has worked in the industry from the ground up — animator for such films as Pocahontas, The Hunchback of Notre Dame and Treasure Planet — and then made the move to direction with the animated short film The Origin of Stitch and the feature-length Hoodwinked Too! Hood vs. Evil.

With Postman Pat: The Movie he takes on the world of stop motion … and he absolutely nails it.  It’s a Brit-flick (think: Wallace and Gromit) with an American director, but you would never know it!

Postman Pat (voice by Stephen Mangan — Billy Elliot, Confetti, Rush, etc.) of a village in England is against the wall when he doesn’t receive the bonus he had hoped for.  He was going to use the proceeds to take his wife Sara (Susan Duerden is the voice actress) on a long overdue trip to Italy, but he has come up with a plan, with the help of his son, to rectify this little shortcoming. 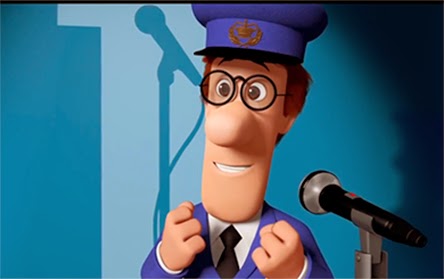 The solution is deceptively simple.  He will win the TV talent showcase, You’re the One, hosted by Simon Cowbell (voiced by Robin Atkin Downes), and all will be right with the world since the grand prize is (drum roll please) … a trip to Italy!!!

Simple is and simple does, right?   If that were the case we wouldn’t have much of a story or, for that matter, any reason to enjoy Postman Pat: The Movie.   Instead, the popular Brit-series featuring Postman Pat — who goes feature-length here — jumps into a full-bore competition that begins to gnaw at his steadfast values.  Mean while, his daily task of delivering the mail is taken up by a Postman Pat robot, whose programming leaves quite a bit to be desired!!

Just how much is that trip to Italy worth … that’s the question!