Money For Nothing On DVD Oct. 7 Courtesy Of Virgil Films And Entertainment 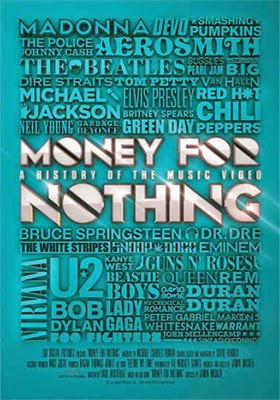 Film editor-turned-documentary filmmaker Jamin Bricker’s Money For Nothing, a feature-length homage to the music video genre — or is more aptly described as an “art form?” — will be making its DVD debut from Virgil Films & Entertainment on Oct. 7.

Based on Saul Austerlitz’s book of the same name, with narration provided by Michael Charles Roman, Money For Nothing, is more than just a chronology of this particular visual medium, but a look inside the trends and mores of each period … an effort to provide a degree of clarity for an “art form” that seems, with all of its razzle-dazzle and visuals, to defy such analysis.

Provocative, and certainly worth a look, even if you just come for the “noise!”

Email ThisBlogThis!Share to TwitterShare to FacebookShare to Pinterest
Labels: DVD and Blu-ray Release Report, Money For Nothing On DVD Oct. 7 Courtesy Of Virgil Films And Entertainment