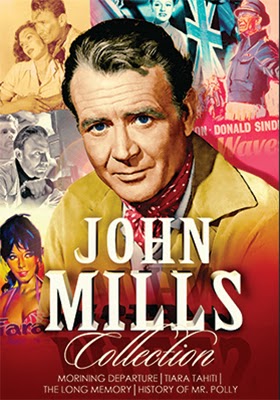 VCI Entertainment announced this past week that two prized film collections showcasing the talents of Brits John Mills (Oscar winner for Ryan’s Daughter) and Kenneth More will be available for films buffs and collectors to own on Nov. 4.

The John Mills Collection includes the 1949 film adaptation of H.G. Wells’ novel, The History of Mr. Polly with Mills as the title character, director Roy Ward Baker’s 1950 submarine thriller Morning Departure (which co-stars the late Richard Attenborough), The Long Memory (1953, Mills stars as a wrongfully-convicted man who must choose between revenge or freedom … Elizabeth Sellars co-stars) and director Ted Kotcheff’s 1962 comedy, Tiara Tahiti, which team rivals Mills and James Mason who find themselves at odds once again in the tropical paradise of Tahiti. 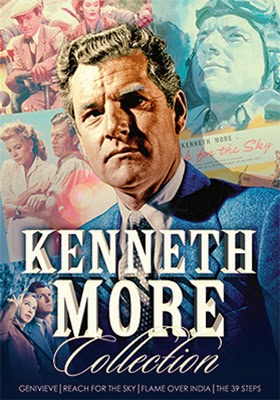 British action star Kenneth More (nominated four times for Best Actor in the Brit equivalent of the Oscars, the BAFTA Awards … winning for Doctor in the House) talents will be showcased in the Kenneth More Collection.

The quartet of films selected here includes director J. Lee Thompson’s 1959 shot-on-location adventure, Flame Over India (aka: North West Frontier), which teamed More with the late Lauren Bacall; More stars in aviation biopic Reach For The Sky, which won the 1957 BAFTA Awards for Best British Picture (knocking off such stalwarts as A Town Like Alice, The Man Who Never Was and Pursuit of the Graf Spee); director Henry Cornelius’ 1953 comedy, Genevieve, which was nominated for Oscars in the Best Writing and Best Music categories and lastly, director Ralph Thomas’ 1959 remake of The 39 Steps, with More as the man on the run … and on a mission!