Midnight Releasing Hammers Away With Sledge On DVD This Coming Oct. 7 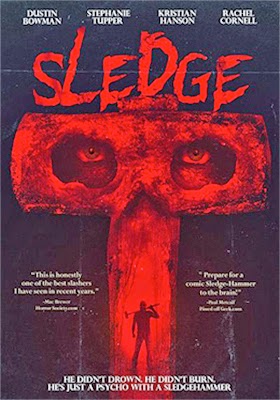 We’ve had chainsaws, axes and other “cutting-edge” weapons, but on Oct. 7 Midnight Releasing’s Brain Damage Films label will be using a bit of blunt force drama to run up the body count.   That’s the DVD debut date for the directing team of John B Sovie II and Kristian Hanson’s Sledge.

They know their horror films as Sledge begins with your standard genre-film set-up that includes a victim pool, a remote location and a homicidal maniac.   As they, the campers (aka: fresh supply of victims), sit around the campfire drinking a few beers, one of them, Alex (Dustin Bowman) graciously gives us the backstory on the local legend of Adam Lynch.

It seems that Adam is backwoods local who just snapped one day, put on a mask (which makes him even creepier) and then just started bludgeoning his friends and campers to death with his sledgehammer.   He didn’t stop there … skinning his victims and collecting heads became sort of a hobby.

Soon enough Adam discovers the fresh supply of campers who have “invaded” his woods and sets about “knocking” them off … the big question, as the action unfolds, will Sarah (Stephanie Tupper) be the last the last camper standing and somehow escape the relentless Adam!

Email ThisBlogThis!Share to TwitterShare to FacebookShare to Pinterest
Labels: DVD and Blu-ray Release Report, Midnight Releasing Hammers Away With Sledge On DVD This Coming Oct. 7