VCI Entertainment Sets Nov. 18 As The Blu-ray Release Date For What The Peeper Saw 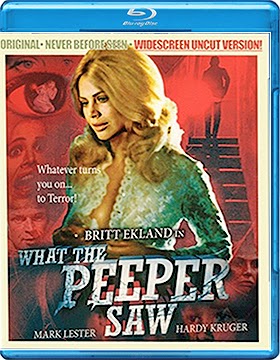 VCI Entertainment will be releasing a newly-prepared and fully-restored (with the infamous excised scenes) Blu-ray edition of the filmmaking team of James Kelley and Andrea Bianchi's 1971 salacious thriller, What the Peeper Saw.

A fully-restored, hi-def version — with Britt Ekland in all her glory — will be high up on many a shopping list come Nov. 18.   Previous renditions of this creepy murder mystery were either bootlegs or unauthorized imports … and all without the nude footage, which was trimmed out for the original domestic theatrical release way back in the early 70s.

Somehow VCI Entertainment has found the original source material and is delivering it to the Blu-ray market place.  Bravo! 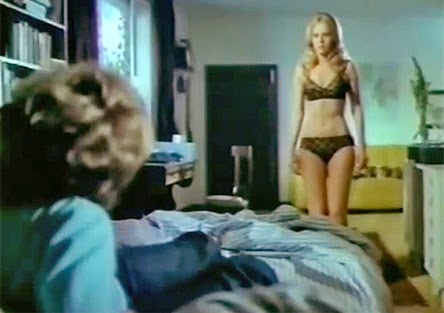 Ekland (The Night They Raided Minsky’s, The Wicker Man, Get Carter and Bond Girl Mary Goodnight in The Man with the Golden Gun) plays Elise, the new trophy bride of Paul (Hardy Krüger), who becomes the lust-interest of his 12-year old son, Marcus (played by none other than Oliver! star Mark Lester).   You can almost hear — in your mind — “yes, mum, may I have another … peek!!!”

At any rate, Paul’s previous wife died under mysterious circumstances and the more Elise knows about her deviant stepson the more she begins to suspect that he’s not just a boy with an interest in her anatomy, but a psychotic killer!!

Email ThisBlogThis!Share to TwitterShare to FacebookShare to Pinterest
Labels: DVD and Blu-ray Release Report, VCI Entertainment Sets Nov. 18 As The Blu-ray Release Date For What The Peeper Saw