Dracula Untold To Be Released As DVD And Blu-ray/DVD Combo Pack Editions By Universal Studios Home Entertainment On Feb. 3 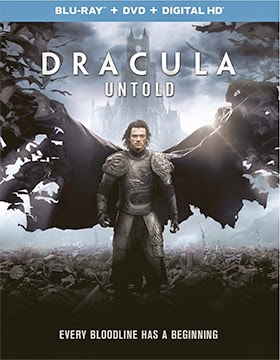 Universal Studios Home Entertainment has targeted Feb. 3 as the release date for a Blu-ray/DVD Combo Pack edition (with UltraViolet) of director Gary Shore’s Dracula Untold.   A stand-alone DVD SKU will also be available on this first street-date Tuesday of February.

The ARR for Dracula Untold is 116 days and domestic ticket sales were a tasty $55.9 million.

The origins of Dracula (aka: Vlad the Impaler) are revisited (very much in the spirit of Coppola’s 1992 Dracula) in this clever saga about the Ottoman Empire’s invasion of Christian Romania with only Vlad (Luke Evans — The Hobbit: The Battle of the Five Armies, Fast & Furious 6, Clash of the Titans, etc.) standing in their way.   When the invaders make the assault on his land personal, he, as legend has it, found a dark and brutal power to resist.

Bonus features here include commentary from filmmaker Gary Shore (making his debut here), who is joined by Production Designer François Audouy (The Wolverine, Abraham Lincoln: Vampire Hunter), five featurettes, including one titled “Luke Evans: Creating a Legend” and an alternate opening and deleted scenes (both include optional commentary by Shore).

Email ThisBlogThis!Share to TwitterShare to FacebookShare to Pinterest
Labels: Dracula Untold To Be Released As DVD And Blu-ray/DVD Combo Pack Editions By Universal Studios Home Entertainment On Feb. 3, DVD and Blu-ray Release Report