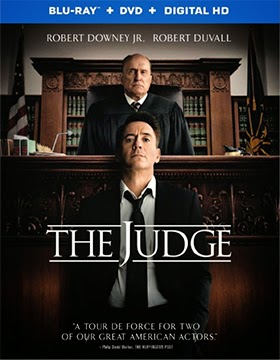 The ARR comes in at 109 days and domestic ticket sales are currently at $46.1 million.
What a marvelous choice of cast members.   How can you go wrong with six-time Oscar-nominated (three each, Supporting and Best, with a win for Tender Mercies in 1983) Robert Duvall being teamed with Robert Downey, Jr. (twice nominated) as father and son in a well-written courtroom drama.

Teamed with this dynamite duo are Billy Bob Thornton (Best Actor for Sling Blade), Vera Farmiga (nominated Best Supporting Actress for her performance in Up in the Air) and Vincent D'Onofrio.   That’s an absolutely “marvelous” assemblage of acting talent.

The Palmer family, of which Downey is Hank, the attorney son of judge Joseph Palmer (Duvall), are having more than their fair share of dark problems these days.   Hank’s mother/Joseph’s wife has just died and the estranged father and son are reunited for the funeral.   And if this wasn’t dreary enough, Hank’s wife is divorcing him.

It’s one of those family gatherings that you’d just as soon skip.   His brothers Glen (D'Onofrio) and Dale (played by Jeremy Strong) are on hand, as is “Sam” (Farmiga), one of Hank’s old flames.   This group of characters will flush out the story (red herrings and Greek chorus aspects), but are secondary to the conflict between father and son, which comes into focus when the aging judge is charged with murder (willful vehicle manslaughter) in the hit and run death of Mark Blackwell (Mark Kiely — Islander, Bruce Almighty, Rain, etc.), a murderer who the judge had let skate on an earlier crime.

Was it an accident?  Or, was it justice being carried out by Judge Joseph Palmer as a redress for his previous judicial failure?   Prosecutor Dwight Dickham (Thornton) is convinced it is the latter and throws the book at him … which brings Hank reluctantly to his father’s defense.

Bonus features include commentary by director David Dobkin (Fred Claus, The Change-Up, Wedding Crashers), deleted scenes and a pair of featurettes — “Inside The Judge” and “Getting Deep With Dax Shepard.” 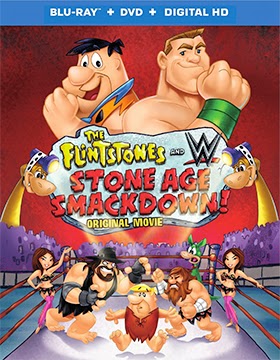 Also announced this week are DVD and Blu-ray editions of the newly prepared animated feature, The Flintstones and WWE: Stone Age Smackdown.

Set for delivery on Mar. 17, WWE’s toughest fighters are on the way to Bedrock, with Fred Flintstone angling to take full advantage of it by promoting his sidekick Barney in a wrestling grudge match!   All we can say is “POOR BARNEY!”

Bonus goodies here include two production featurettes — “The Wrestlers of FFE” and “How To Be a Stone Age Wrestling Star” — plus two bonus cartoons, “The Engagement Ring” and “Take Me Out to the Ballgame,” both starring Fred Flintstone (voiced by Alan Reed).