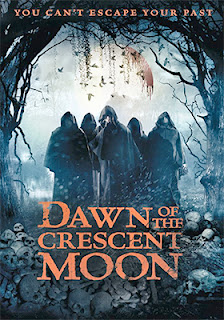 Indican Pictures has circled July 28 on the calendar as the DVD debut date for director Kirk Loudon’s award-winning supernatural horror thriller, Dawn of the Crescent Moon.

A word of advice, if you are heading out to some remote Texas location (Dawn of the Crescent Moon was filmed in and around Fayetteville, Texas) to research a centuries-old massacre as the focus of an assignment for your Myths and Legends class, make sure you know all the members of your group before departing.   This is especially true if one of the members of your little camp-out group can channel the dead!

It all revolves around the “Legend of Blood Lake,” which is the catalyst for the assembly of this particular “victim pool” … that would be a quintet of attractive college students, who are joined by an equally attractive townie named Dawn (Shiree Nelson — Apart, Love Land), who is more than eager to help them with their research.

We know early on that it is not safe and that comes from the local barkeep, Cyrus (played by veteran character actor Barry Corbin — Urban Cowboy, WarGames, etc.), who speaks of the legend and gives them fair warning that camping out there at Blood Lake may not be a great idea. 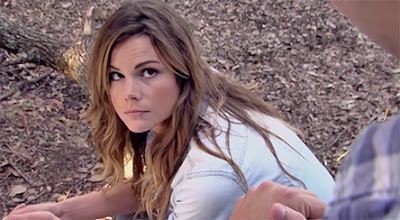 They pitch their tents and gather around the campfire for a little chit-chat and everything goes down hill from there.    It seems that Mara sees the spirits of the dead, which are with the assembled group, but when the subject of the slaughter of a Comanche tribe (the roots of the Blood Lake legend) is broached, all hell breaks loose.

Something is creepy and not quite right about this gathering of six in the woods.  Is it Mara, the “I see dead people” blonde — is she really a college student?   Or what of Dawn, she is a stranger and why is she so helpful?   Or perhaps, it is one of the other four who might just have a secret that the spirits of this horrific legend will expose.    You can count on one thing, not everyone will be passing this Myths and Legends assignment!!!

Email ThisBlogThis!Share to TwitterShare to FacebookShare to Pinterest
Labels: DVD and Blu-ray Release Report, Indican Pictures' Dawn Of The Crescent Moon Heads To DVD On July 28