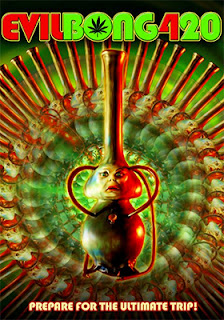 Full Moon Features will be lighting it up — in more ways than one — on Aug. 25 with the DVD debut of the latest edition in the Evil Bong film series, cult filmmaker Charles Band’s Evil Bong 420.

This is either the fourth or fifth entry in the series — depending on how you count the 2013 film release of Gingerdead Man vs. Evil Bong (was that a Gingerdead Man story or one about the sinister Evil Bong?)  — ah what the hell, it counts for both, just like Freddy vs. Jason.

But no matter, the always-hustling Rabbit (Sonny Carl Davis) gets the focus of attention this time as the proprietor of his own bowling alley, where the action is not necessarily on the lanes. 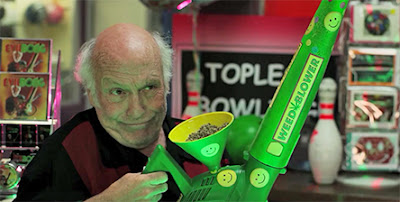 There’s weed, lots of weed, and with Rabbit’s new invention, the Weed Blower, there are new creative ways to partake.   Plus the eye-candy comes in the form of a bevvy of well-endowed Full Moon ladies — who get extra-horny when they get a taste of Rabbit’s new buds.  And of course the nerdy Larnell (John Patrick Jordan) and the lovely Sarah Leigh (Robin Sydney) are back, as are the Gingerdead Man and other dimensional Evil Bong.

Bonus features include a making-off featurette and Youtube viral videos.