As we approach the 60 percent mark for the number of New Theatrical releases that are to be expected during the calendar year, there is a disturbing trend developing.   Namely, the number of mega-hits — those films grossing in excess of $100 million — are lagging well behind the same pace as last year.

These films, along with the next block down (those in the range of $25 - $100 million range) are the market-drivers for the home entertainment industry.   The axiom that hits make the market is to be considered as being generally true in nature as consumers tend to rent and buy what they know (where the money has been spent in promoting and distributing new theatrical releases).   Thus, the fewer the hits, the lower the expectations must be for all “after-market” activities.

Of the films in theatrical release for the weekend of Aug. 7 through 9, only Universal Studios’ Trainwreck appears to be the only film in current release to have the momentum to move it into the $100 million box office area.

If that holds, then only 18 films released thus far have made this golden box office circle.   At the same point last year, there were 22.   You have to go back to 2012 to find the same count of 18 at this point in the calendar year.

And that’s not good news for the studios, as 2012 had delivered a record-setting 47 films with a box office take of between $25 million and $100 million during that same period.   This year we have a paltry 35 such films.   This will certainly leave gaps in the DVD and Blu-ray release calendar — some of the street-date Tuesdays will be sans market-drivers.

Below is a year-to-date chart reflecting activity to date and projections for the full calendar year of 2015.   For entire year, the DVD & Blu-ray Release Report is projecting 615 New Theatrical releases, down 2.2 percent from 2014.   If trends hold, just over 91 percent of these will eventually cycle to DVD and roughly 50 to 55 percent will find a home on Blu-ray. 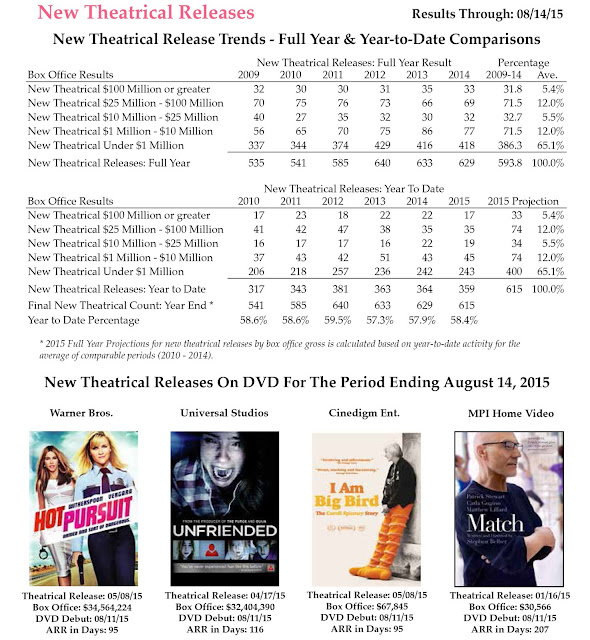