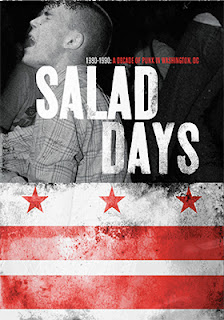 For the nation’s capitol it was a decade ushered in by the final death throes of the Carter administration and the arrival of Ronald Reagan in the Oval Office.  For music it was MTV, Madonna, Michael Jackson (with glove) and the mid-80s arrival of Metal, but through it all the D.C. area had it’s own music revolution.

On Sept. 18, MVD Entertainment Group will be releasing documentary filmmaker Scott Crawford’s insightful look at the punk scene in Washington D.C. during this electric period with the DVD debut of the New Rose Films production of Salad Days: A Decade of Punk in Washington, DC (1980-90).

They were educated, many were the scions of wealth and political power, but their love and focus was music.   They spawned Ian MacKaye’s Dischord Records and his bands Minor Threat and Fugazi; Henry Rollins and State of Alert (who would jump to the other coast with Black Flag); the reggae punk of Bad Brains; the transitional Rites of Spring and more.

Director Scott Crawford has fashioned a real tell-all about this unique music chapter, combining contemporary interview sessions with those who literally grew up during this period and nicely blending in vintage fan-supplied concert clips.   They grew, they mutated … they moved into other venues and sounds, but this is where it all began for many of them.   A must for music fans and surprisingly effective in its telling.