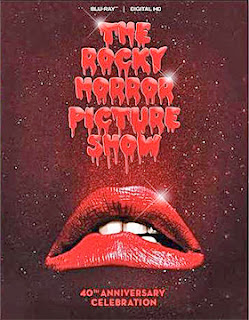 Let’s do the time warp again!

It is hard to comprehend that 40 years have passed since Tim Curry, Susan Sarandon, Barry Bostwick, Meat Loaf, Richard O’Brien, Patricia Quinn and Nell Campbell moved through their paces in the ultimate midnight movie, The Rocky Horror Picture Show.

20th Century-Fox Home Entertainment announced this past week that The Rocky Horror Picture Show: 40th Anniversary Celebration will be released as newly minted Blu-ray and DVD product offerings on Sept. 22.

Back in 1975 I was running theatres and these included the Strand in Ocean Beach and The Ken in Kensington (both in the San Diego area), as well as The Wilshire in Fullerton and the Balboa Theatre in Newport Beach.   These were all arthouses and this Jim Sharman and Richard O’Brien collaboration seemed to fit right in, so we started running the film as a midnight attraction, which proved to be quite rewarding. 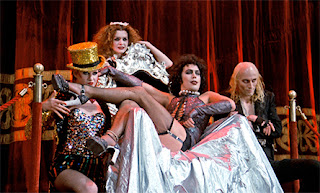 There was just one problem, 20th Century-Fox had only struck a few 35mm prints and didn’t see much future for a film that the studio brass at the time clearly didn’t understand.
We tried “bicycling” the Orange County print that we had between the Wilshire in Fullerton down the freeway in the dark of the night to the Balboa.

We started before midnight at The Wilshire and when the first 20-minute reel finished it was dispatched to the Balboa, where the film started there after midnight and had a full reel of “stuff” (Bambi Meets Godzilla, etc.) to kick off the show — that bought some time.

The same process took place for our San Diego print.   We started at the Ken and delivered the film reel by reel to the Strand in Ocean Beach.

It was a logistical nightmare, so we abandoned the Ken (which solved the noise complaints) and stuck with just the Strand.   The same for Orange County, we dropped The Wilshire and just played it at the Balboa Theatre.  Problem solved.

And then the studio, despite our success with the midnight showings, wanted the two 35mm prints back.   After some haggling, we agreed to pay for two 16mm prints — yes, we paid for our own prints — to secure a continued run.   Over three years of Friday and Saturday midnight showings followed before I exited the world of exhibition and moved into the early years of home entertainment (VHS and Beta). 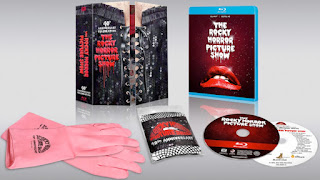 It was a blast.   We had bumper stickers made up and handed them out at the early midnight showings … it was so cool to see cars pass by on the freeway with one those The Rocky Horror Picture Show bumper stickers proudly displayed.  My children were raised on the film and know the songs by heart … “It’s just a jump to the left.  And then a step to the right.  With your hand on your hips.”

The film is so much fun and this 40th Anniversary edition from 20th Century-Fox Home Entertainment is entirely faithful to that spirit.   Both the DVD and Blu-ray SKUs contain the UK and domestic theatrical cuts of the film.

Exclusive to the Blu-ray SKU is commentary from creator/writer Richard O’Brien (aka: Riff Raff), who is joined by Patricia Quinn (aka: Magenta).   Additionally, there are outtakes, a pair of deleted musical numbers — “Once in a While” and “Super Heroes” — a “Rocky-oke: Sing It!” interactive-feature, an alternate opening and more, much more!!!