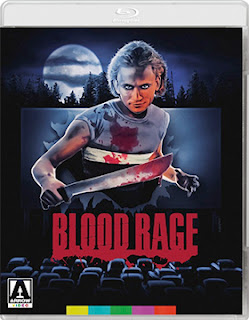 Arrow Video, with sales and distribution support from MVD Entertainment Group, has dusted off director John Grissmer’s 1987 slasher flick, Blood Rage (aka: Nightmare at Shadow Woods) and given it a brand new 2K restoration that features three different cuts of the film.

A Blu-ray/DVD Combo Pack will be retail-ready on Oct. 20.

It’s tough being a twin, vying for attention from mom. Terry (Mark Soper – Graveyard Shift II, Swordfish, White Oleander) is just a kid but it has already become an obsession, he wants it all and one evening, at the local drive-in theatre, he arrives at the perfect solution and hacks a teen to death with an axe.  His brother, Todd (also played by Soper), is blamed for the crime and shipped off to an asylum.   Problem solved. 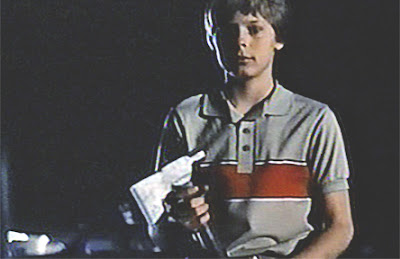 For ten glorious years Terry has had his mom (played by Louise Lasser) all to himself.   And then news arrives that Todd has escaped.   If you are as crazy as Terry is — especially knowing that his brother has suffered for ten long years as a result of his deception — the simple solution is to hack to death more people!  Let the blood flow!!

As mentioned, Blood Rage arrives with three viewing options.   The first is the “hard” cut of the film, next is the “R-rated” theatrical release of Nightmare at Shadow Woods and the third is a “composite cut,” which combines elements of both versions.

Other bonus goodies include commentary from filmmaker John Grissmer, video sessions with Mark Soper and Louise Lasser, the featurette titled “Return to Shadow Woods” and more.