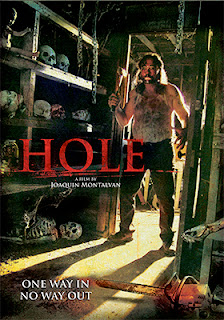 When dear old mom ties you to a chair and smacks the living hell out of you (and more) for days on end — as a child you quickly lose track of time — it does tend to color your thinking.  Especially, if you snap and kill her.

In director Joaquin Montalvan’s Hole, which is heading to DVD on Nov. 24 courtesy of Wild Eye Releasing, we pick up the horrible young life of Ed Kunkle (played by the late Paul E. Respass — Legend of the Hillbilly Butcher, Mobius; with Gavin Graham as the younger Ed) after spending some time in prison, who is now just scraping by as a janitor.  He’s got this glazed, far-off look about him … he clearly needs help.

When the voices kick in (and the flashbacks), you know it is just a matter of time before all that repressed rage is going to manifest itself.   And boy does it.   He kills mom again and again — young women, who are themselves tied to chairs and then bludgeoned to death.  Trophies are kept (you don’t want to know).

It appears that our boy Ed has only one friend in the world.  That would be Eve (Teem Lucas — Mobius), his next-door neighbor, and those visits are both creepy (she too has issues) and tension-filled (is Ed going to snap?).

The third member of this brutal horror tale is Detective James (Jim Barile), who is beyond being burned out.  He’s seen way too much and has become numb to it all … the dark side calls him as well (if justice can’t be served, then he will dish out some of his own).