The Man From U.N.C.L.E. Arrives On DVD And Blu-ray/DVD Combo Pack From Warner Bros. Home Entertainment On Nov. 17 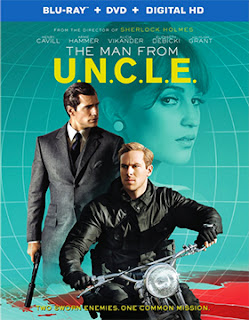 Available for consumers to select from will be DVD and Blu-ray/DVD Combo Pack editions.

The television series, made famous by Robert Vaughn and David McCallum —US and Soviet spies teamed to battle T.H.R.U.S.H. — was clearly a product of the Cold War (on television from 1964 through early 1968 — a total of 105 episodes). But the series was also well-timed in that the James Bond/007 series of films (Dr. No in 1962; From Russian with Love the following year; Goldfinger arrived in 1964; and, Thunderball followed in 1965) had caught fire theatrically (Ian Fleming was involved in both).  The demand was there!

Just as The Man from U.N.C.L.E. reached its zenith along came Mission: Impossible and that was it for Robert Vaughn and David McCallum.  M:I was a better action series and didn’t carry the baggage of the “U.N.”   The organization that Solo and Kuryakin worked for didn’t actually have anything to do with the United Nations, but perception is reality.

Tom Cruise has made — through a series of very smart moves — the theatrical releases of Mission: Impossible a monster film franchise.   Sadly, lightning did strike twice with this re-boot.
The Man from U.N.C.L.E. only pulled in $45.4 million in domestic ticket sales, so this potential film franchise is probably DOA.  For the record, the ARR is 95 days.
As to bonus goodies, common to both the DVD and Blu-ray/DVD Combo Pack SKUs is the featurette titled “A Higher Class of Hero.”

Exclusive to the Blu-ray edition are five additional featurettes.

Email ThisBlogThis!Share to TwitterShare to FacebookShare to Pinterest
Labels: DVD and Blu-ray Release Report, The Man From U.N.C.L.E. Arrives On DVD And Blu-ray/DVD Combo Pack From Warner Bros. Home Entertainment On Nov. 17