Paramount Home Media Targets Apr. 5 For The DVD Debut Of Matthew Perry And Thomas Lennon Starring In The Odd Couple: Season One 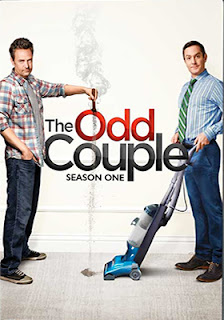 Paramount Home Media expands its TV-on-DVD product offerings in April with the announcement this past week that The Odd Couple: Season One (starring Matthew Perry and Thomas Lennon) will be joining Episodes: The Fourth Season (a two-disc set) and House of Lies: Season Four (also a double-disc set) on the Apr. 5 release calendar.

For 50 years the love/hate relationship between Oscar Madison and Felix Unger has endured.   First, The Odd Couple was a 1965 Broadway play by Neil Simon, with Walter Matthau and Art Carney in the roles of Madison and Unger.   Then came a feature film in 1968 with Jack Lemmon as Felix Unger and Walter Matthau reprising his Tony-winning performance as Oscar Madison — Neil Simon was nominated for Best Adapted Screenplay (he had previously won the Tony for the writing of his stage play).

With these back-to-back hits it was only natural that The Odd Couple would migrate to the small screen, which it did in the fall of 1970 with Tony Randall as the fastidious Felix and Jack Klugman as Oscar.   The series ran for five full seasons and 114 laugh-filled episodes … 16 Emmy nominations, with wins for both Klugman (two) and Randall (one) in the Best Actor category. 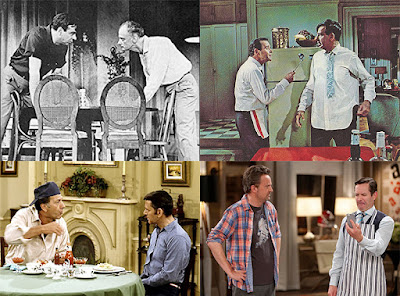 In February of last year CBS re-launched The Odd Couple with Matthew Perry as Oscar Madison and Thomas Lennon as Felix Unger.

Paramount Home Media and CBS Home Entertainment will be delivering all 12 episodes from the first as a double-disc DVD collection.   The timing of Apr. 5 is no accident as the second season premiere is on Apr. 7!! Also added to the TV-on-DVD release calendar this week is Apr. 26 is the five-disc collection of The Beverly Hillbillies: The Official First Season … all 36 episodes from the 1962/63
debut season in one place for the first time!!!

Apr. 19 is also the street date for Nickelodeon’s double-disc DVD release of Paw Patrol/Bubble Guppies: Dive in and Roll Out.

Email ThisBlogThis!Share to TwitterShare to FacebookShare to Pinterest
Labels: DVD and Blu-ray Release Report, Paramount Home Media Targets Apr. 5 For The DVD Debut Of Matthew Perry And Thomas Lennon Starring In The Odd Couple: Season One