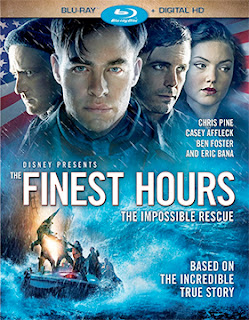 Director Craig Gillespie’s CGI thrill ride, The Finest Hours, which was adapted for the screen from the 2009 tell-all account by writers Michael J. Tougias and Casey Sherman titled “The Finest Hours: The True Story of the U.S. Coast Guard's Most Daring Sea Rescue,” will be heading home as both DVD and Blu-ray selections from Walt Disney Studios Home Entertainment on May 24.

Timed for the Memorial Day weekend, this true-life story of the rescue of the crew of the SS Pendleton (an oil tanker that was literally cut in half — the f/x on this film are outstanding) off of Cape Cod on February 18, 1952 by Petty Officer Bernard C. Webber (Chris Pine) and his patched-together crew arrives with an ARR of 116 days.

Domestic ticket sales were, however, a disappointing $27.3 million … and that is a shame as this is both a solid, edge-of-your-seat thrill ride and a well-told story.  It is now up to the home entertainment group to bang the promotional drums loudly.

Bonus features include a pair of featurettes that are common to both release SKUs — “Brotherhood” and “The Finest Inspiration: The U.S. Coast Guard.”  The Blu-ray edition has deleted scenes and three additional featurettes —“Against All Odds: The Bernie Webber Story,” “Two Crews” and “What is Your Finest Hour?”