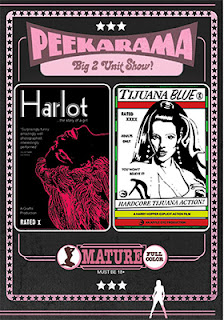 Vinegar Syndrome has selected May 31 as the street date for two new additions to its popular “Peekarama” DVD series.

The latest in the series of vintage adult feature films includes two from the golden era (when film, not tape was the source material) and both films are from director Howard Ziehm (aka: Harry Hopper).

Harlot (1971), starring Fran Spector and Patty Alexon arrives as a newly-minted 2K restoration from original films and is presented for the first time uncut.   The shortened version (running about 47 minutes) played theatrically during the spring of 1971 and viewers always felt that the final act (which is actually quite graphic) was missing connecting plot elements.

That mystery — for connoisseurs — might now be solved as Vinegar Syndrome is reporting that their presentation of Harlot clocks in at 64 minutes (that’s roughly an entire film reel).

Bonus features with Harlot include a commentary track provided by filmmaker Howard Ziehm. 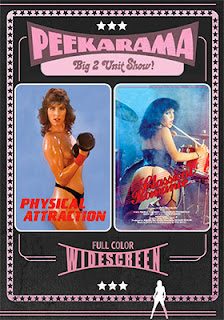 The second Peekarama double feature heading home on May 31 from Vinegar Syndrome are new 2K restorations (from original film negatives) showcasing the work of Richard Mailer.

Legendary adult film star Shanna McCullough stars as Bobbi, a hooker with a desire to get out of the business.   When an Olympic coach named Ed (David Cannon) sees potential in her athletic ability her opportunity to shine is at hand.

Classical Romance, also released in 1984, focuses on a piano man named Eric (Paul Thomas), who becomes enamored with such women as Helen (Desiree Lane), Judy (Renee Summers) and Laura (Jacqueline Lorians) and must decide whether to enjoy the 80’s equivalent of “Fifty Shades of Grey” or focus on his career.   Tough choice!