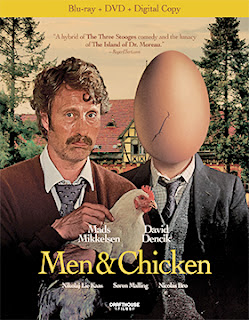 The strangest film of the year — hand’s down; no arguments with this one — is Men & Chicken, the Danish-language import from Oscar-winning filmmaker Anders Thomas Jensen.  It will be a getting a Blu-ray/DVD Combo Pack release on Oct. 25 from Drafthouse Films, with MVD Entertainment Group providing domestic sales and distribution support.

The ARR is a leisurely 186 days and domestic box office receipts from the film’s limited arthouse showcase were $30,127.

Gabriel (David Dencik) and Elias are (Mads Mikkelsen) loveless brothers who discover that they, at their father’s death, are not full brothers afterall, but half-brothers (apparently dear old dad got around).   So much for that … brothers, half-brothers, what does it matter if they can’t stand each other!

Ah, but it turns out that Gabriel and Elias have other siblings that their father has neglected to inform either of them of.   And they too are in Denmark.

Now if you are either Gabriel or Elias, and have your wits about you, you are wise enough to let “sleeping Danish dogs lie.”  But then we wouldn’t have much of a story, would we?

The feuding brothers, and this where Jensen’s film goes off into the realm of “strange,” go in search of their siblings (a trio of DNA-challenged half-wits).   What they find takes Men & Chicken into the world of Fellini and David Lynch … they, the trio, reside in an asylum of their own making where strict rules of conduct are religiously adhered to!

Men & Chicken is presented in Danish with English subtitles.