The Film Detective Announces Ten New Restorations For Delivery To DVD On Oct. 4 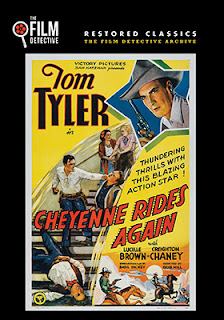 The Film Detective announced this past week that ten new film restorations will be ready for a DVD release on Oct. 04.

They are an eclectic mix that includes a pair of Western entries from the 1930s.   Direct Robert F. Hill’s 1937 film release of Cheyenne Rides Again, starring Tom Tyler as Tom “Cheyenne Tommy” Wade is the first of these.

The release of this fast-paced Western was so successful theatrically that Tyler was recruited to reprise his Tom Wade persona in four additional films.   Lucile Browne (Tumbling Tumbleweeds, Rainbow Valley, etc.) is Tyler’s co-star and none other than the great Lon Chaney Jr. is the villain of the piece.

Also from 1937 is director S. Roy Luby’s The Red Rope, starring Bob Steele as a cowboy that is targeted for murder, but manages to turn the tables in such a way that the hired gun, Rattler Haynes (Lew Meehan) goes after the man who hired him instead.   Talk about “Western justice” … Lois January (The Wizard of Oz, Rogue of the Range, One Rainy Afternoon, etc.) co-stars as Steele’s bride-to-be. 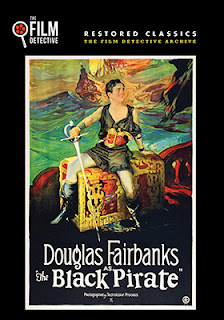 Also getting a new film restoration is the 1926 silent film, The Black Pirate, starring Douglas Fairbanks.

On the film noir front, director Bryon Haskin’s summer of 1949 thriller, Too Late For Tears, starring Lizabeth Scott and Dan Duryea.   When a payoff of $60,000 is mistakenly dumped into the hands of Lizabeth Scott it sets in motion a wild and deadly ride as the real owner, Dan Duryea, comes looking for what belongs to him.   She will do anything to keep it — including murder — and he will do what is necessary to get it back … and MURDER is his business!

A sweet little murder mystery, director Elmer Clifton’s 1941 film release of City of Missing Girls, is also include in the Film Detective’s Oct. 4 DVD restoration mix.   The Crescent School of Fine Arts, run by King Peterson (Philip Van Zandt), is nothing but a front for a white-slavery operation … Nora Page (Astrid Allwyn) is hot on the story, but what she finds will end up breaking her heart!

Other product offerings in the mix include: Battle of San Pietro, Born to Fight, Breakfast in Hollywood, Night at the Follies and The Road to Hollywood. 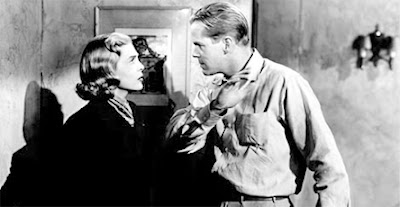