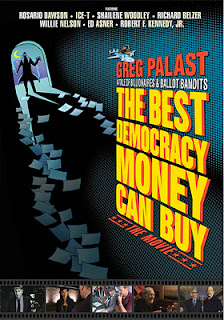 The film will play a few dates theatrically before reaching the home entertainment market place prior to this year’s presidential election.

For the record, the ARR works out to just 25 days from its theatrical launch to the date of its DVD release by Cinema Libre.   Reported ticket sales from its "media awareness" theatrical run currently stand at $11,739.

Palast takes a hard look at the different schemes, including “Operation Crosscheck,” that are employed to rig elections at the state level.   He zeroes in on billionaire hedge fund manager John Paulson and equally rich venture capitalist John Singer and the infamous Koch brothers as the likely sources for the funding of these clandestine operations.