Icarus Films Tabs Dec. 6 As The DVD Release Date For The Seasons in Quincy: Four Portraits of John Berger 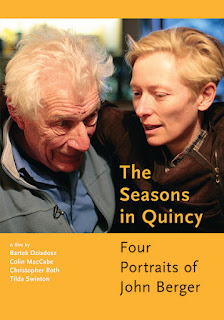 John Berger, artist, philosopher, novelist and playwright is the subject of Icarus Films’ Dec. 6 DVD release of The Seasons in Quincy: Four Portraits of John Berger.

The film played the festival circuit earlier this year, followed by a very limited arthouse run and arrives in the home entertainment arena with an ARR of 95 days and ticket sales of $16,738.
This documentary presentation has been assembled in four parts, or “seasons.”

These are variously titled: “Ways of Listening,” “Spring,” “A Song for Politics” and “Harvest” … and each segment is directed and presented by associates, contemporaries and admirers — all artisans in their own right.

The first, “Ways of Listening,” is directed by University of Pittsburgh professor Colin MacCabe and features Oscar-winning actress Tilda Swinton, MacCabe and Berger in an intimate (as friends) “catch-up” of old friends (Swinton and Berger share the same birth date, although years apart … and are known to refer to each other in terms of “twins”). 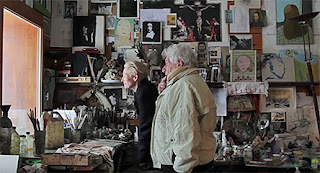 Swinton returns in the fourth segment (“Harvest”) as the filmmaker, where her children and Berger’s son, Jacob, spend time together in the Scottish Highlands. 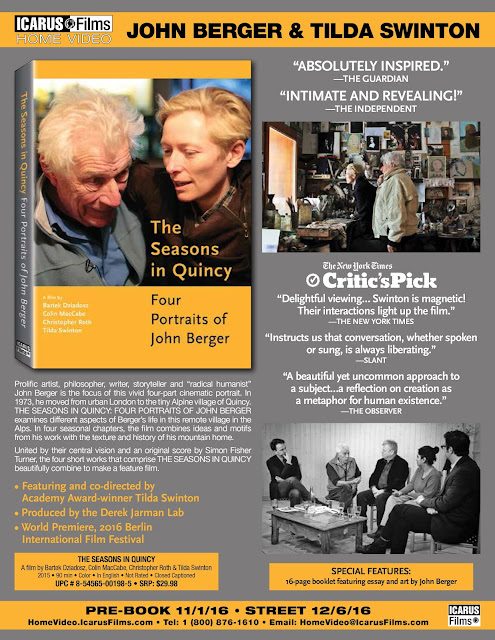 Email ThisBlogThis!Share to TwitterShare to FacebookShare to Pinterest
Labels: DVD and Blu-ray Release Report, Icarus Films Tabs Dec. 6 As The DVD Release Date For The Seasons in Quincy: Four Portraits of John Berger