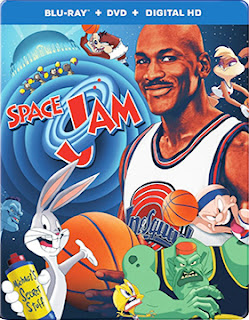 Bonus nuggets include commentary from filmmaker Joe Pytka, who is joined by Daffy Duck (voiced by Dee Bradley Baker) and Bugs Bunny (voiced by Billy West), the featurette titled “Jammin’ with Bugs Bunny and Michael Jordan” and two music videos, including “Fly Like an Eagle” by Seal.

Also on the Blu-ray release front is the Nov. 1 Blu-ray debut of director Michael Anderson’s 1975 film release of Doc Savage: The Man of Bronze, starring Ron Ely as the iconic pulp novel adventurer of the 1930s.

And Oct. 18 will see the DVD debut of documentary filmmaker Bill Teck’s One Day Since Yesterday: Peter Bogdanovich & the Lost American Film, an in-depth look at Bogdanovich’s disastrous 1981 film, They All Laughed … it was Audrey Hepburn’s final film and Dorothy Stratten, who co-stars, was living with Bogdanovich when she was murdered by her estranged husband after the film was completed, but before its theatrical release.