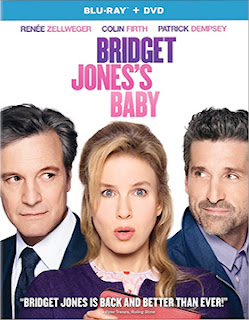 Post-Labor Day theatrical releases tend not to arrive in the home entertainment market place until after the New Year.   Occasionally they do, it’s not earthshaking.   Universal Pictures Home Entertainment has elected to release DVD and Blu-ray/DVD Combo Pack editions of director Sharon Maguire’s  Bridget Jones's Baby (the third film in the series) on Dec. 13.

The ARR is a swift-to-market 88 days and ticket sales for this Renée Zellweger (who looks radically different after a six year hiatus from the screen … and 12 years since her last appearance as Bridget Jones) star vehicle were a bid disappointing at just $22.8 million.

Bonus features include a gag reel, an alternate ending, deleted scenes and a half-dozen featurettes — “Full Circle: The Making of Bridget Jones's Baby,” “Renée Returns,” “The Difference that 15 Years Makes,” “Bridget's Boys,” “In London, In Love” and “Sharon's Show: The Director.”