Icarus Films Teams With Bullfrog Films For The Dec. 6 DVD Release Of Just Eat It: A Food Waste Story 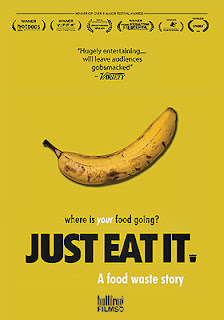 News arrived this past week that on Dec. 6 Icarus Films will be releasing on DVD the Bullfrog Films production of documentary filmmaker Grant Baldwin’s, Just Eat It: A Food Waste Story.

What are the basic rules of survival?   Water, food and shelter in that order are the keys to surviving in the wild.   Your body can go only so many hours without water, so that’s first.    Next, you can burn fat and survive for some period of time without food, but at some point that too will be a matter of life and death.   Shelter, that could be some shade, or a cave in a snow storm … important as well, but food and water come first.

So if water and food are so important — literally, to your survival — why on earth are we throwing 50 percent of our food supply away as waste?   That’s the question that Jenny Rustemeyer and Grant Baldwin challenge the viewer in their film Just Eat It: A Food Waste Story. 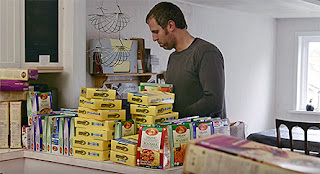 They take a radical approach to drive home the folly of our consumer-driven society and the unthinkable amount of food that is wasted each year.   The plan: live for six months on food that is regarded as waste … food that is to be thrown away.   That’s cringe-worthy, just the thought of dumpster-diving and picking through the half-eaten leavings of strangers.   Sounds like a “vomit” thrill-ride!

But that’s not what they found.  Instead, farms with produce too late to make it through the distribution cycle — that was fair game.   Yummy and nutritious, there’s nothing wrong with a bruised peach or a banana that’s gone a little mushy!

And they found more.   Boxes and boxes and boxes of “expiration date” products tossed out by grocery stores … perfectly good food products wasted; wasted by the ton!

In the end, Grant and Jenny didn’t eat garbage, they never went hungry and they actually ended up with more food than they could eat.

You want a wake-up call, especially one that you can share with your friends and family … then catch the DVD debut of Icarus Films’ Just Eat It: A Food Waste Story on Dec. 6
Bonus features include a 50-minute “educational version” cut of the film that can be shown in classrooms. 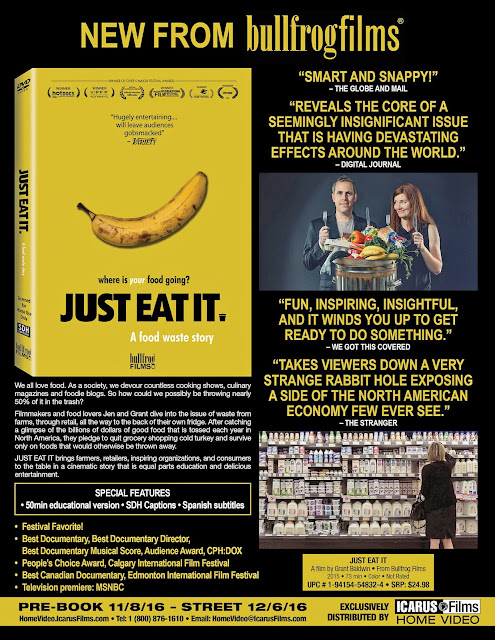 Email ThisBlogThis!Share to TwitterShare to FacebookShare to Pinterest
Labels: DVD and Blu-ray Release Report, Icarus Films Teams With Bullfrog Films For The Dec. 6 DVD Release Of Just Eat It: A Food Waste Story