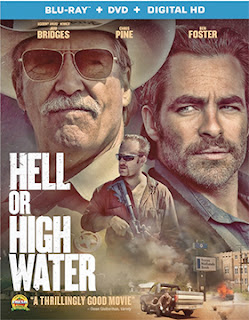 Has the studio given up on the new format?   The jury is still out, but this is strike two — both Hell or High Water and Nerve are heading to retail without a 4K Ultra HD buying option.

That Nov. 22 home entertainment launch date for Hell or High Water yields an ARR of 102 days from the film’s theatrical debut to its subsequent release as DVD and Blu-ray product offerings.   The box office take was a nice $25.8 million.

Exclusive to the Blu-ray/DVD Combo Pack are a trio of featurettes — “Enemies Forever: The Characters of Hell or High Water,” “Visualizing the Heart of America” and “Damaged Heroes: The Performances of Hell or High Water” — a filmmaker Q&A session (we’re guessing that would include director David Mackenzie and writer Taylor Sheridan) and video of the film’s “Red Carpet” premiere.