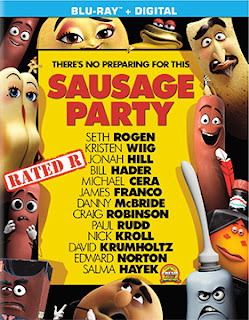 Sony Pictures Home Entertainment will be releasing an “R-rated” version of the CGI-animated food-quest comedy, Sausage Party, on Nov. 8 as a three-SKU array of home entertainment product offerings.

The ARR is a quick-to-market 88 days and ticket sales were a sizzling-hot $98.8 million.

For the film that got millions of dollars worth of free publicity by having its risqué trailer shown prior to Finding Dory screenings, Sony Pictures will be delivering DVD, Blu-ray and 4K Ultra HD/Blu-ray Combo Pack editions.

Bonus features include four production featurettes — “The Booth,” “The Great Beyond,” “The Pitch” and “Seth Rogen’s Animation Imaginatorium.”  Exclusive to the 4K Ultra HD/Blu-ray Combo Pack and Blu-ray SKUs are a gag reel, a “Line-O-Rama” feature and the additional featurette titled, “ Shock and Awe: How Did This Get Made?”

Also streeting on Nov. 8 is a double-disc Blu-ray presentation of Taxi Driver: 40th Anniversary Edition.  This new 4K restoration of the film was supervised by cinematographer Michael Chapman and director Martin Scorsese … a limited Fathom Events theatrical presentation of the film will take place in selected theatres on Oct. 16 and Oct. 19 prior to the film’s home entertainment release. 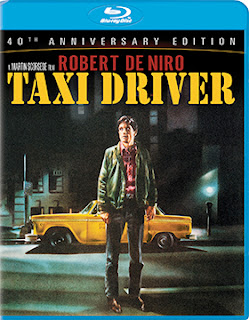 The film was nominated best picture in 1976, along with four other timeless films (a very good year at the movies) — Rocky, Network, All the President’s Men and the Woody Guthrie biographical tale, Bound for Glory — and both Robert De Niro and Jodie Foster were nominated in acting categories (De Niro losing out to Peter’s Finch’s brilliant Howard “I’m Mad as Hell” Beale interpretation in Network and Foster losing to Beatrice Straight as television network executive William Holden’s long-suffering wife in the same film).

As to bonus features, there are two commentary options — one featuring the 1986 Criterion Collection-produced commentary with director Martin Scorsese and writer Paul Schrader and a newly-prepared commentary that also features Paul Schrader and the University of Virginia’s Robert Kolker (professor of film studies and the author of “A Cinema of Loneliness”).